Several years ago I was chatting with a friend. Her children were a little older than mine were at the time and she was a teacher, and so she had done Halloween to death. I remember the feeling of shock when she confessed to me that she didn't like Halloween. In fact, she dreaded it. I understood why she felt like that but I told her how much I enjoyed Halloween, and always would.

So ... now I'm eating my words. I don't like Halloween. That's right ... I said it. I just don't like it. I enjoy seeing all the kids coming to the door in their costumes ... especially the littlest ones who can't believe that people are putting candy in their bags. ...but that's all I enjoy about it.

That being said, I try and put on a brave face for Cameron who loves the night as much as I used to. He wants to make a haunted garage, decorate the house, buy a fog machine, carve a million pumpkins, and wear the scariest costume. He's got the energy for the night that I don't have anymore.

He did a great job in carving the pumpkin. Apparantly there must have been something going around the neighbourhood because there were a few pumpkins who were vomitting that night. 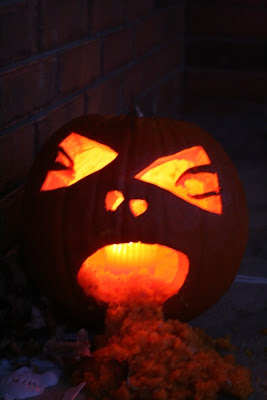 He dragged to decoration box out and managed to get a few out. After coming back from trick-or-treating he was hiding in the garage behind the big skeleton face, and was jumping out at the bigger kids. I think he managed to scare a few. 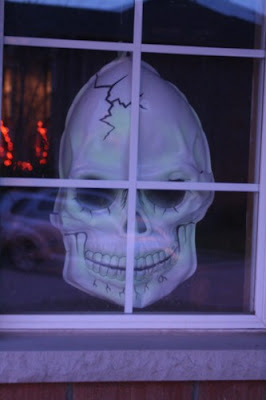 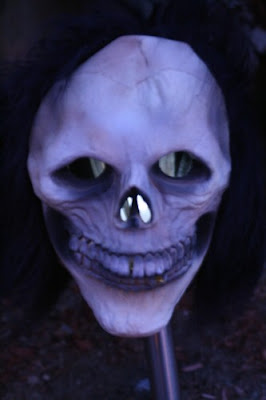 Next year I really should try and muster up the energy to go all out and decorate with him!
Posted by Barbara at 9:15 AM