Day 6
I kinda feel like the rest of the trip was anti-climatic. Day 6 was a sea day as we worked our way back to Tampa from Roatan.
We could have, and probably should have slept in, since we had nothing to rush off to, but since the deck chairs around the pool fill up very quickly on sea days, we were up and out of the cabin by about 9:30 or 10:00. Can you believe that by that time almost all the chairs were taken? We couldn't find any chairs for the 7 of us together, except for down the upper deck, towards the back of the ship, and it was so windy that it wouldn't have been enjoyable.  We managed to find three chairs together, and then another three down the way, but it was still windy.
In the end, we just kept three of the chairs, as everyone else didn't want to be battered by the wind all day.
John and I spent the day just lounging, with my mom joining us for a while, and Cameron joining us for a while.
The rest of the day was spent trying to organize and pack to have the suitcases put out that night for the stewards to take them away.

Day 7
We pulled into Tampa about 8 a.m. in the morning. Since they do things a little different in Tampa, anyone who wasn't an American Citizen had to go down to the big theatre for 7:30 and wait for Immigration Officers to board the ship so that they could do the immigration process there. It was a huge nightmare as the theatre was full (mostly of us Canadians who were there for our March Break). We weren't allowed to take our luggage/carry-ons with us - and yet they were putting pressure on us to get out of the cabins as soon as possible, so they could get them turned around for the next group. By the time the officers showed up (probably about 8:15 - and only 3 of them to start) and we cleared immigration (about 9) we were starving because we hadn't eaten. We grabbed our stuff out of our cabin and headed up to breakfast. Since everyone now had to be out of their cabins, but no one was allowed to leave the ship (until immigration had cleared the ship)  there were no tables in the buffet. People were standing and eating. We ended up squeezing into seats with another family at their table (thankfully they were nice enough to let us sit with them.)

The whole process made me never to want to sail out of Tampa again! It was very frustrating.

After we disembarked, we had a lot of time to kill as our flight wasn't until 8p.m. We spent the day at the Tampa Aquarium - which was just across the road. 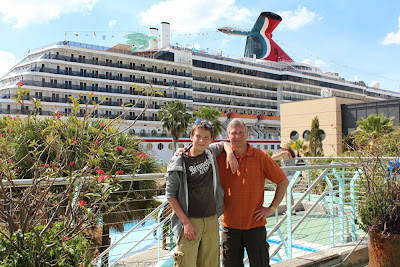