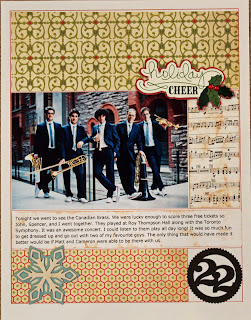 Tonight we went to see the Canadian Brass. We were lucky enough to score three free tickets so John, Spencer, and I went together. They played at Roy Thompson Hall along with the Toronto Symphony. It was an awesome concert. I could listen to them play all day long! It was so much fun to get dressed up and go out with two of my favourite guys. The only thing that would have made it better would be if Matt and Cameron were able to be there with us. 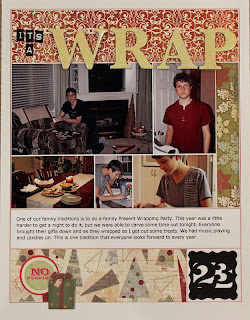 One of our family traditions is to do a family Present Wrapping Party. This year was a little harder to get a night to do it, but we were able to carve some time out tonight. Everyone brought their gifts down and as they wrapped as I got out some treats. We had music playing and candles on. This is one tradition that everyone looks forward to every year. 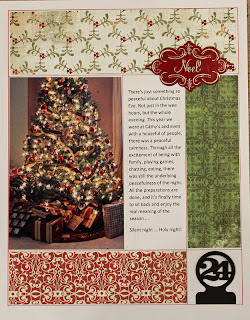 There’s just something so peaceful about Christmas Eve. Not just in the wee hours, but the whole evening. This year we were at Cathy’s and even with a houseful of people, there was a peaceful calmness. Through all the excitement of being with family, playing games, chatting, eating, there was still the underlying peacefulness of the night. All the preparations are done, and it’s finally time to sit back and enjoy the real meaning of the season ...