I can't believe I'm done the album! I really enjoyed this project. 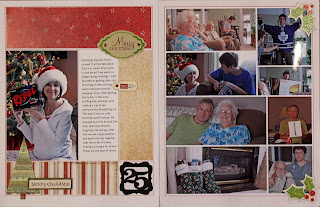 Christmas Day has finally arrived. It all started about 6:30 a.m. when Matt came in and asked if we were no longer doing stockings. I had planned on getting them out first thing in the morning when everyone was still sleeping. Oops. After getting the turkey in the oven, stuffing the stockings, and making a cup of tea everyone started getting up. This year it was us, and Grandma and Grampa. We enjoyed our time around the tree, opening presents, laughing and talking. After that we ate a big breakfast and spent the day together with the smell of turkey making us hungry for dinner. These are the best of times!
December 26th 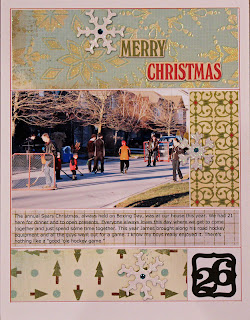 The annual Sears Christmas, always held on Boxing Day, was at our house this year. We had 21 here for dinner and to open presents. Everyone always loves this day where we get to come together and just spend some time together. This year James brought along his road hockey equipment and all the guys went out for a game. I know my boys really enjoyed it. There’s nothing like a “good ‘ole hockey game.”
December 27th 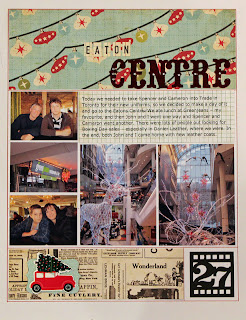 Today we needed to take Spencer and Cameron into Trade in Toronto for their new uniforms, so we decided to make a day of it and go to the Eatons Centre. We ate lunch at Greenjeans – my favourite, and then John and I went one way and Spencer and Cameron went another. There were lots of people out looking for Boxing Day sales – especially in Danier Leather, where we were. In the end, both John and I came home with new leather coats.
December 28th 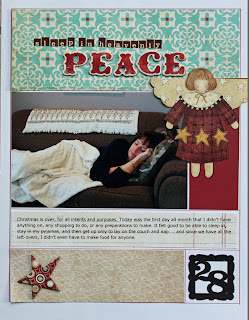 Christmas is over, for all intents and purposes. Today was the first day all month that I didn’t have anything on, any shopping to do, or any preparations to make. It felt good to be able to sleep in, stay in my pyjamas, and then get up only to lay on the couch and nap ... and since we have all the left-overs, I didn’t even have to make food for anyone.
December 29th 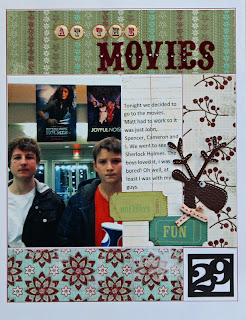 Tonight we decided to go to the movies. Matt had to work so it was just John, Spencer, Cameron and I. We went to see Sherlock Holmes. The boys loved it, I was bored! Oh well, at least I was with my guys.
December 30th 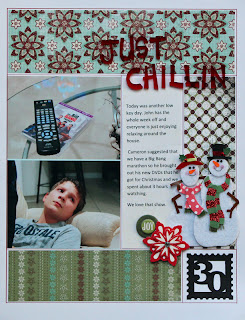 Today was another low key day. John has the whole week off and everyone is just enjoying relaxing around the house.
Cameron suggested that we have a Big Bang marathon so he brought out his new DVDs that he got for Christmas and we spent about 3 hours watching.
We love that show.
December 31st
This layout is also for the first challenge of the New Year on the Use Your Stuff blog. Thet challenge was to use numbers as a design element. 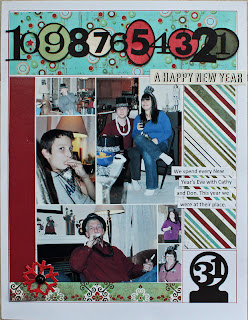 We spend every New Year’s Eve with Cathy and Don. This year we were at their place.
Posted by Barbara at 4:13 PM