Not a creature was stirring ... not even a mouse!

It's very quiet here this morning. I had every intention of sleeping in, but I woke up a 7 and couldn't get back to sleep. So, here I sit, enjoying the peace a quiet, totally envious of everyone else in the house who are still sleeping soundly.
In attempt to make this totally useless post have purpose, here's a random list of some things that are going on around here:
-Matt is doing well at school. He's enjoying the couse (particularly working in the lab) and seems to be keeping up on the work load. I know it was a huge adjustment for him to start at college and to have a full course load. He has met up with some of the "kids" that he met while in Dominican Republic. Some of them are at the same college. He has been hanging out with them a little.
-Matt and Spencer started Driver's Ed this week. Yikes!
-Cameron is doing well with his laptop. If you remember last winter when it was being prescribed for him he was fighting getting one and we got him to reluctantly agree to it. (a lot of kids get one, but then refuse to use it in school - which seems very pointless.) He's been using it in his classes, and he has even had some of his friends ask how he got one. He and I go for another training session in a couple of weeks to learn more of the software that's on it.
-I broke down and went to a chiropractor yesterday for an assessment. There are definately some issues in my neck and lower back, but the thing that concerned me most was that when he asked me to walk heel to toe in a straight line, my whole centre of balance is off and it looked like I was drunk. I have to go back Monday for the results of all the tests and exrays that he took.
-My friend, Deb, is getting married. (I'm sure I mentioned it in a post back in the spring.) They have set a date for May and she has asked me to be her Maid of Honour (I'm going to refuse saying Matron because it makes me feel old)
-it's going to be a busy weekend. Today we have to head into Agincourt. Cameron has a band rehersal in the afternoon and a concert in the evening. Maybe we'll kill time in between at Ikea. I love Ikea.
-Sunday is a DYB rehersal for Spencer so that means going back into Toronto in the evening.
-last night we went to Mother Tuckers to celebrate Spencer's birthday. I was very surprised that he didn't choose Mandarin.
-I'm back in the scrapping groove. In fact, I think I'm going to end this and go and scrap while no one is begging for the computer that sits on my table.
Here's another recent layout: 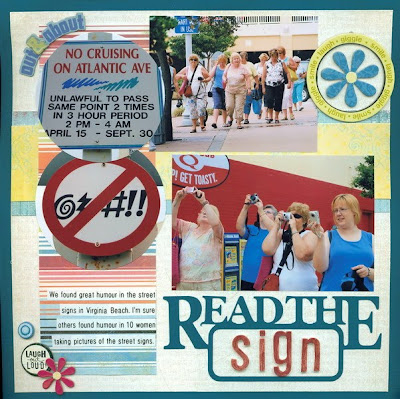