What would our vacation be without some excitement?

After Halifax, we drove up to Digby. It was a nice day and since we got there early, we decided to drive down the Dibgy neck and check it out. Wouldn't you know it. About a third of the way down it was all socked in with fog and so the drive was, well, boring. We came back and drove around Digby a little, and then checked into a great bed and breakfast.

I've never stayed at a B & B before. It was great. Just what we needed at that point in our trip. It was very relaxing and quaint. We had a two-bedroom suite that was in a separate house from the main house. We really enjoyed it. I could have stayed there for a few days.
The next day we packed up, again, and started making our way around the Fundy Coast.
Not long after starting out we were driving along the coast, on a side road, out in the middle of God's country, when we hit a huge pot hole. OK, let me rephrase that. I hit a huge pot hole. Well, it damaged the rim so bad that the tire went flat. ...and we're out in the middle of nowhere!
So we pulled over into a driveway of some community building to change it. 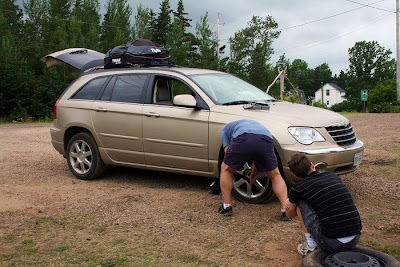 We had to unload everything from the back to get the spare and the jack out. Unfortunately, the jack was not up to the task. After we had the car jacked up and were getting ready to take the tire off, the jack bent and the car came back down. 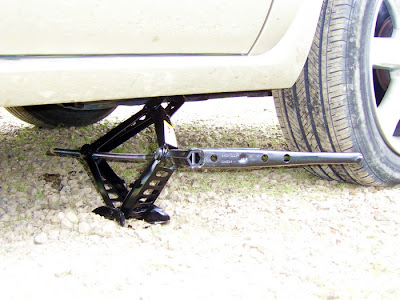 OK, so plan B. We called CAA. After talking with them for a couple of minutes, we lost the signal. So, John set off to get a better signal or to see if he could use someone's house phone. 15 minutes later he was back and said that CAA was on their way but it would be about 45 minutes. Not long after, a couple of men pulled into the parking lot and said that they had a jack. Yay! With their help we got the tire changed and then we were on our way again. 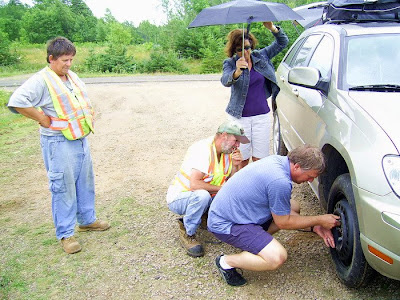 We spent most of the day after that driving from place to place trying to get the rim fixed. There were no rims anywhere to be had. We finally found a machine shop (recommended to us by several people) and they were able to fix the rim and get the dent out. Perfect! The cost was about $50 compared to the $500 that a new rim would have cost us.
On the bright side, we were able to teach our boys how to change a flat tire.
Here's Matt helping out: 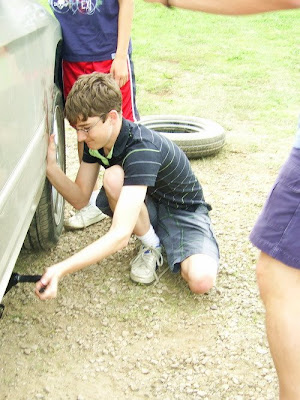 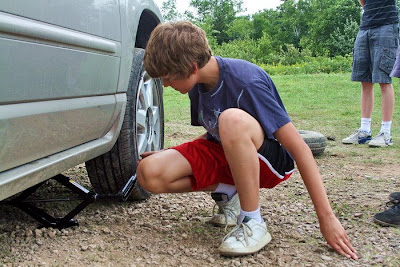 And here's Spencer helping out: 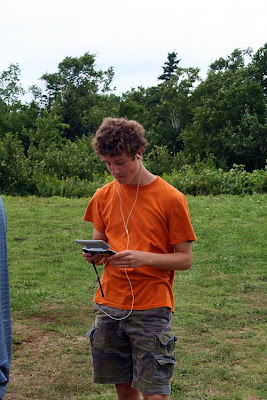