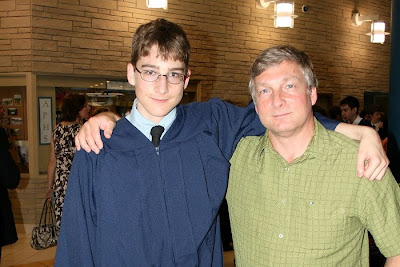 I am the mother of a high school graduate!
Matt's grad was last night. I'm not a sentimental kind of person, and I don't get emotional very often, but as the grads were entering the gym to Pomp and Circumstance I found myself a little wet around the eyes. I had so many mixed emotions. I was both looking back over all the years that it took to get to that moment, and excited as I look ahead. He's at the threshold of a whole new exciting world.
As I watched him last night I was so proud. He's had to overcome so much in the last 19 years and for the first time in his life I breathed a sigh of relief. He's going to be just fine. (I know that the all the mothers of special needs kids will totally understand what I am saying.) He will still have stuggles (and lots of anxiety) but he's going to be successful. Call it mother's intuition, I don't know, but I just know that he's going to be just fine.
I'm so proud of him and who he is. I'm so excited for where he's going and what lies ahead of him.
As John said last night, Phase one is complete. 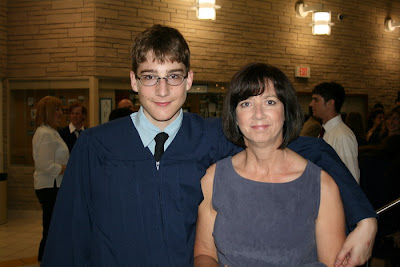