It's officially over for another season. 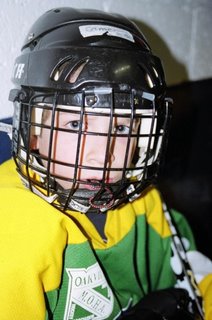 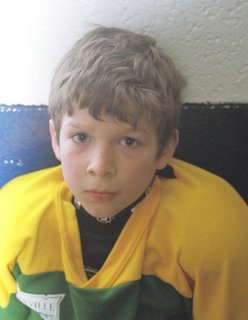 Well, the hockey season is officially over. Yesterday Spencer had his team party, and today Cameron has his. Check Cameron out in his gear. Is there anything cuter than a child in hockey equipment.

I never thought I would be a hockey mom. I always said that I didn't want my boys to play either football or hockey, but then I had a boy who adores sports. When we returned to Canada, he was so excited at the thought of strapping on skates and getting out on the ice. I gave in. How could I not?

Here we are 6 years later. All the boys have played and my past 6 winters have been spent in the arena several times a week. For the one year that all three boys played I was in the cold arena at least six times a week. ...and I actually enjoyed it. I can't say that I enjoyed the 6 a.m. practises (and there have been plenty of those) but I have really enjoyed standing in the stands (literally as the seats are way to cold to sit on!) watching them and encouraging them.

It has been a wonderful experience. We have had wonderful coaches and great parents. No one has gotten loud, rude, or arguementative. We've won some and lost some. Each one of the boys have been on winning teams that have won the championship, and each have been on teams that have not done so well. It never really seems to matter to the kids if they lose. They always have fun and learn so much about team work.

After 6 years I can say that I am a proud hockey mom! ...and I look forward to it all starting again in 7 months.
Posted by Barbara at 2:34 PM