I figured that once school was in that I would have ample time again to keep my BLOG. So what's happened? I don't really have a reason except that I just haven't done it.

School is in full swing now. Everyone has settled back into a routine. We are having some struggles with Matthew, homework, and anxiety. I was hoping that this year would be a good one, but it doesn't look like that's happening. I've already met with his teachers after he had a total shut down at school one day. The good news is that one of his teachers, his history teacher, has a 14 year old son who has nonverbal learning disorder and knows exactly what we all are dealing with.

I finally convinced John into letting me trade spaces with him. He had a main floor study which he never used and my scrapping room was in the basement. He's moved down stairs and I've come up. I've just finished making the move and actually scrapbooked yesterday. I still have a little organizing to do, but for the most part I'm done. Hopefully I will get a lot more done now!

Here's a layout that I did over the summer of my neice. Isn't she cute??? 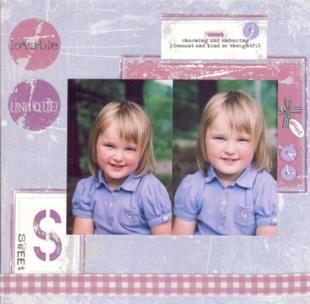