Cruise Day 2
This was a sea day. I was up early - much earlier than my two men, so I sat out on the balcony reading for an hour. When I couldn't stand my hunger any longer, I woke them up and told them I was going to eat. After breakfast we were able to grab some deck chairs that overlooked the pools. By that time there wasn't much left. On sea days the chairs fill up very early with people's stuff ... and the people may or may not return to visit their stuff at different points throughout the day. It's really very frustrating. Chair hogs!
It was quite sunny and hot. We spent a good part of the day relaxing there ... some of us chasing the shade around, and some of us allowing our skin to develop a nice, deep red colour.
That evening was the first formal night. After getting all dolled up, and forcing my men to put a tie around their necks, we enjoyed a nice dinner in the main diningroom with my family. It also happened to be my parents' anniversary. 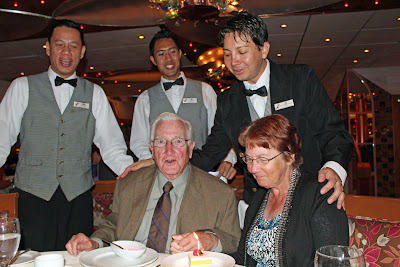 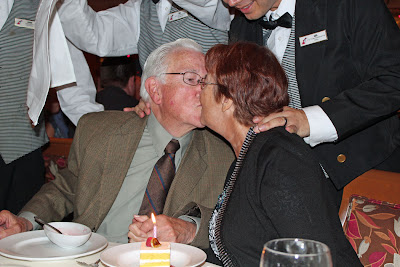 We finished the day off with some of the shows. The shows were all pretty good.

Cruise Day 3
This was a port day. We arrived in Grand Cayman early morning. We had an early morning excursion booked so we had breakfast delivered to our cabin. Is there anything better than room service?
Grand Cayman is a tendered port and we'd never experienced that before. The tenders just pull up beside the ship and load people on and take them to shore. 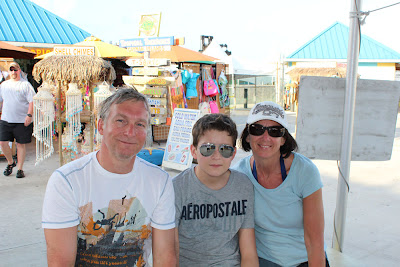 Our excursion was a trip to "Sting Ray City" to swim with the Sting Rays. The Sting Rays were wild, but used to swimming with people (and getting fed). They were huge and would just swim by rubbing up against us, or take squid right out of our hands. It was very cool! 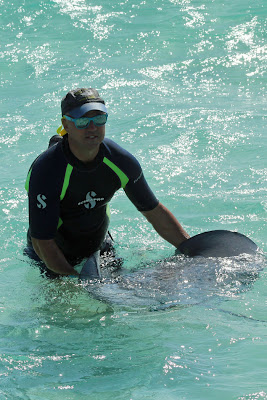 After that, we went back to the port area and walked to a local restaurant where we met up with a friend, Sharon, and her husband, who have a time-share there. We had a very nice lunch together, and then Sharon and I sat and caught up while Jim, John, and Cameron went snorkelling right beside the restaurant. Both John and Cameron loved it! 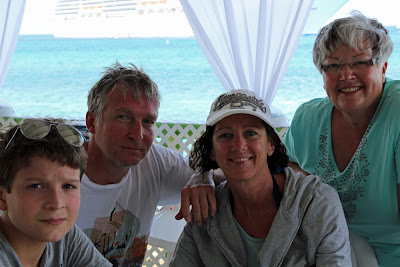 Then it was back on the ship to shower and watch the ship pull up anchor and set sail again.

Cruise, Day 4
This was another port day. This time it was Cozumel. We had planned on just relaxing on the beach this day so we grabbed a taxi and went to Paradise Beach Park - which was just that - a beach park. It cost $2 to get some lounge chairs. They had a gorgeous pool just off the beach, and all kinds of water toys (it cost $12 for unlimited use of the water toys all day which John and Cameron took advantage of.) It was a gorgeous place to be. We really enjoyed our day there.
I love Mexico! 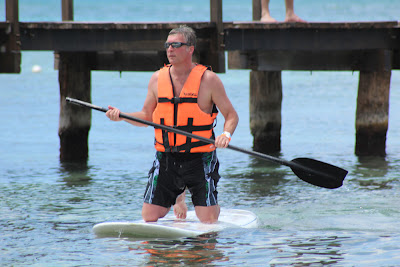 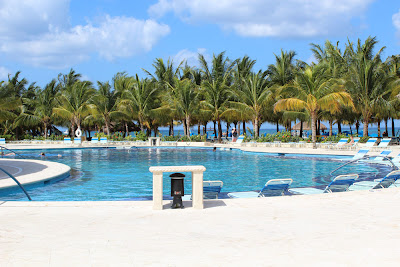 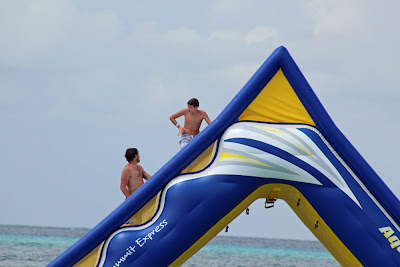 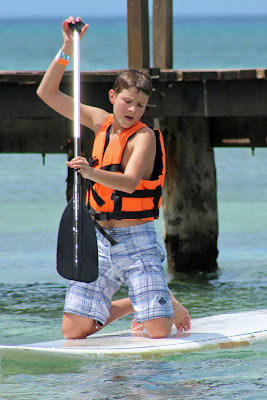