Our Vacation - Day one

Early on Saturday morning, and I mean early!, we left home to drive down to Rochester. (That's where Cameron was with his school's Robotics Team for the FIRST Robotics regional competition. ) We made it in time for the matches to start at 9 a.m. We had a fun day of watching 42 different robots racing around, trying to shoot baskets, and attempting to balance (with other Robots) on a teeter-totter type bridge. In the end, Cameron's team came in third place with along with their alliance. Very cool!
Once they were done, and back at their hotel, we picked him up (along with one very dirty and smelly suitcase) and checked into another hotel near the Rochester Airport.

Sunday morning we were up very early, again, and off to the Airport in Rochester for a 7 a.m. flight.
We flew to Tampa to board our cruise. The line-ups were incredible and took, in total, about an hour and a half to get through. At one point, as we were standing in line outside, I decided to pull out my camera and amuse myself by taking pictures. I was taking a picture of the front of the cruise port when a very arrogant, and self-important security gaurd (who was actually just out there directing traffic) came over to me and started laying into me about taking a picture of the port and demanding that I delete the photo. "That's how 9-11 happended you know!" is what he angrily told me.  Are you kidding me???? Do you really, honestly believe that 9-11 happened because a tourist was taking a picture of the front of a cruise building with a ship in the background? Are you that paranoid? And do you really think I can't just google it and get a picture anyway ... which, by the way, I did, and got a bunch, including this one ... 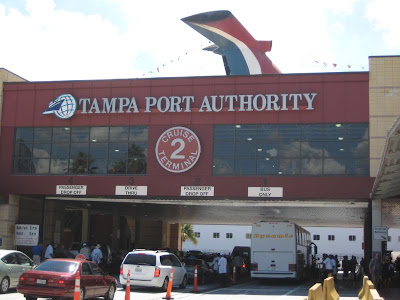 I'm still shaking my head and laughing at that one.
We finally boarded around 2 p.m. and after dropping our carry ons off in the cabin we headed to the buffet for lunch and to meet up with my parents, and my sister and brother-in-law, who'd been on board already for a couple of hours.
Here are just a few photos from that day:

Cameron and I waiting in line. 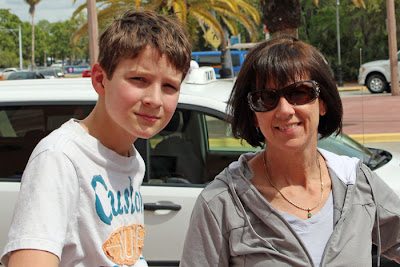 Cameron and John sailing out of Tampa 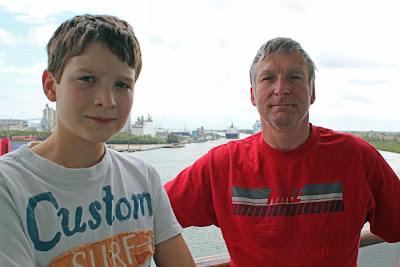 Our first dinner in the Main Dining Room - My parents. 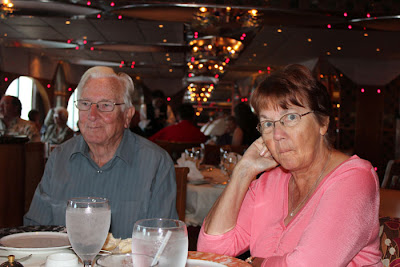 My Mom and my sister Cathy 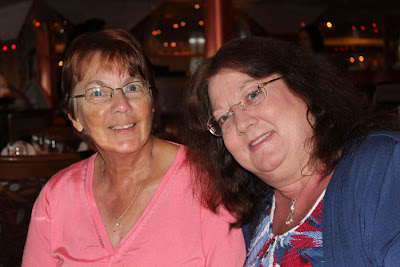 Cameron and my brother-in-law Don 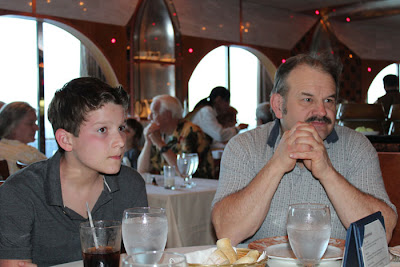 Our first night on board was sooooo excited. We were so tired that all three of us (John, Cameron, and I) were in bed by about 10:30. Too little sleep was finally catching up with all three of us.