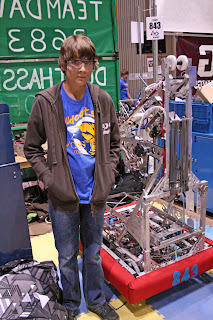 Cameron is on the Robotics Team at school. Some of you already know this. Some of you have been forced to listen to me do some shameless bragging about it. It all started a couple of years ago when Cameron went along with the rest of his. then grade 8, class to tour the high school. He came home all excited and couldn't stop talking about the Robotics Club. How nice, I thought. He'll have fun with that. I had no idea!

A little over a year ago (during his first semester of high school) he came home and told me that the "club" was starting up and could he be a part of it. Of course, I said. You'll have fun with that. I had no idea.

One day near the beginning of January, he came home and told me that the start day for the "robotics club" was the following day. On a Saturday, I asked him? That's odd. Well, OK. What's a couple of hours on a Saturday. It will be nice. He'll have fun with that. I still had no idea.

...then he went to the kick off. I drove him. I saw the Universities there recruiting. I saw some of the information. Wow, I thought. They really take this seriously. Good for him. He'll have fun with that. I really, honestly, had no idea.

When he came home, with all the information ... the pages, and pages of information, and I started to read, the light started to go on. Wow, I thought. I had no idea!! Wikipedia defines FIRST Robotics as this:


The FIRST Robotics Competition is an international high school robotics competition organized by FIRST (For Inspiration and Recognition of Science and Technology). Each year, teams of high school students compete to build robots weighing up to 120 pounds (54 kg), not including battery and bumpers, that can complete a task, which changes every year. Teams are given a standard set of parts and the game details at the beginning of January and are given six weeks to construct a competitive robot, that can operate autonomously as well as when guided by wireless controls, to accomplish the game's tasks.[3]

The Teams attend a kick off meeting where the details of the competition are released - the size of robot they need to build, what the robot needs to do, etc. and then they have 6 weeks only to build it. At the end of the 6 weeks the robot is tagged and shipped.

Cameron is in the middle of the build right now. That means that Tuesday and Thursdays he has to stay after school and build from 3 p.m. to 9 p.m., Saturdays from 8 - 4, Sundays, where needed, and during exam week (like this week) they build when they're not writing an exam. It's very intense. There are about 30 students on the team, three teachers, and many mentors from the industry that come in to share their expertise and work with the students. It's an incredible programme.

In March the Team will go to their first competition in Rochester, New York. They will be there for 6 days. At the end of March they compete in a competition at the University of Waterloo - that one is 4 days. So ... I really had no idea what we were signing up for, but I'm thrilled that he can be a part of such an amazing programme with peers who are highly motivated!

CNN ran a special on Education in the US and they actually followed three different Robotics teams from the kick off to the competition. You can take a look at that here: F.I.R.S.T. Teams are filmed with Soledad O'Brien

And finally a video of his team's quarter final match from last season:

I guess I'm a bit of a geek because I'm looking forward to both competitions. We're going to drive down to Rochester to watch the final matches on the Saturday. We're also going to gather up whoever wants to come and go to the matches at Waterloo.