Our week away was fantastic. It flew by so fast. Matt kept walking around today saying "I miss being on the ship" and I had to agree with him.

On the Friday we started out early in the morning, just the three of us - John, Matt and I. Spencer and Cameron were supposed to be going with us just for the weekend and then returning with their cousin on the Sunday, but Spencer had a mid-term on Friday late afternoon. (really - who schedules a mid-term on Friday, late afternoon of the Thanksgiving long weekend?) So, Spencer and Cameron ended up staying home.

After stopping in Grove City to do a little outlet shopping, we made it to Fairfax, Virginia around 6 p.m. with just enough time to check into the hotel, wash and change, and make it to the rehearsal dinner. Afterwards, we went back to the hotel and crashed because we had to be up bright and early the next morning for the wedding.

Jon and Maggie's wedding (Jon is my nephew) was beautiful and they looked so happy. I love spending time like that with family. I don't get to see my brother David all that often and it was so good to spend a little time with them. 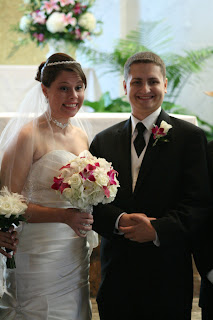 The other Happy Couple: 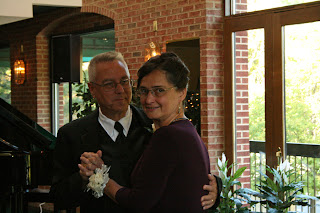 Not everyone in the family was able to make it to the wedding, but Ricky did. He looked so handsome in his suit. I know he enjoyed being around the family, but I think his favourite part of the day was eating a half litre of icecream! 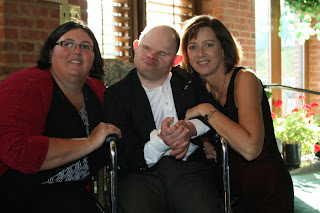 When the wedding was over we drove to Baltimore and the next morning we were up bright and early again to get to the Cruise Port. 11 of us boarded the Carnival Pride setting sail for Bahamas.
Ethan and Owen love to pose for the camera. 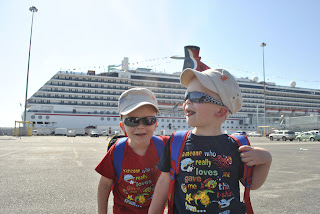 Cathy, myself and Mom having lunch and waiting to get into our cabins. 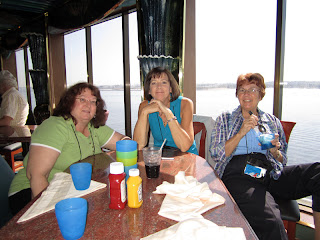 We had a balcony room - Matt, John and I were together. They were fairly large in comparrison to what we had the last time we cruised. 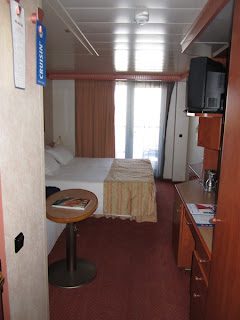 We stayed on our deck to watch the departure (and to unpack and settle in.) 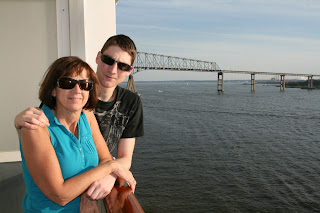 The next two days we spent at sea. The first day was pretty overcast and it ended up raining late afternoon. Matt didn't mind. He found a nice cozy spot in one of the lounges where he could plug his laptop in and play his game. He made good use of this spot all week. 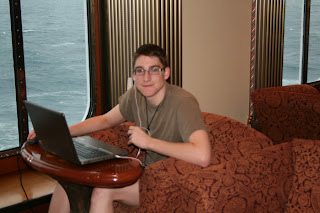 That night was our first of two formal nights and so we took advantage of that and ate in David's Steakhouse. The food was great ... the desserts to die for. 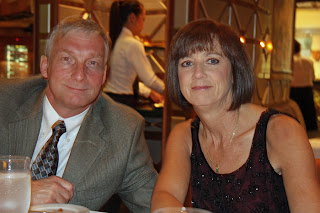 Doesn't my boy clean up well? His Dad isn't too shabby either. 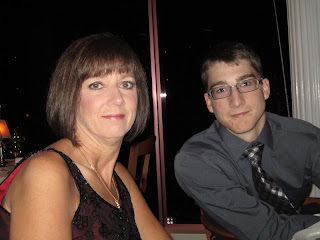 The weather that afternoon and evening wasn't great. We hit a storm that was moving north from Florida and the ocean was pretty rough. We ended up with three sea-sickened casualties in our group - fortunately we weren't among them.
The next day, our second sea-day, was beautiful - sunny and warm. We spent the day around the pool, reading, swimming (well, some swam, not me) and catching some rays. 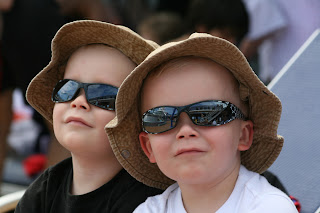 That evening we discovered these tables in the back of the diningroom. We ended up here every night after that. The wait staff assigned to these tables were so much fun. Matt looked forward to seeing them every night ... one in particular I think. 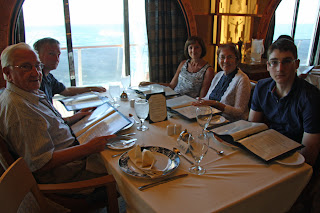 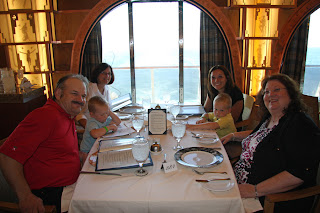 Our third full day was in Cape Canaveral, Florida. We arrived around 7 a.m. After an early breakfast, we disembarked and spent the day at the Kennedy Space Center. 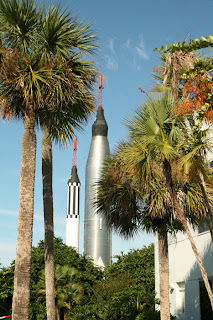 We even found the Canada-arm. 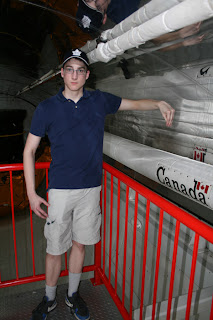 Around 10 a.m. on the fourth day we were in Nassau, Bahamas. Everyone did their own thing that day. John, Matt, my Mom and I got day-passes to the Hilton Hotel and spent the day just relaxing on the beach and pool. It was heavenly! I think it was the best day of the whole cruise. 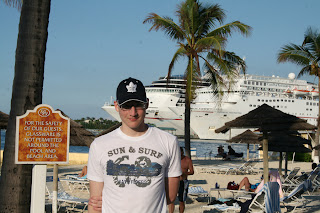 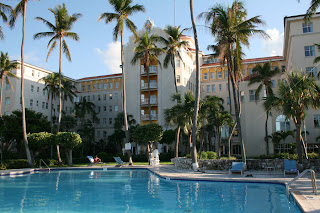 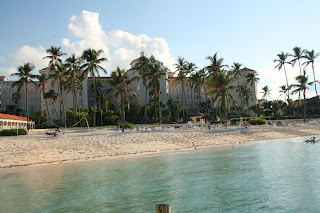 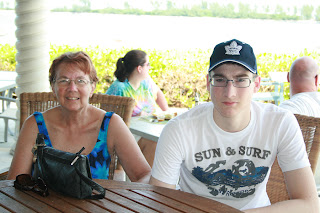 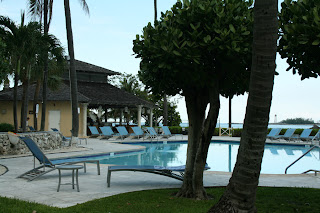 Day 5 we were in Freeport. There wasn't a lot to do in port there so we used this as a shopping day. We took a cab to Lucaya Market where we spent a couple of hours shopping in the shops and, Matt's favourite, the straw market. I think this was one of Matt's favourite days (well, maybe Cape Canaveral was his favourite, but this would have come second.) He loved shopping in the straw market. He bought lots - two things for Spencer, two things for Cameron and a few things for himself including a "rolex" watch which he purchased the day before in Nassau but had it adjusted in Freeport. He loved bartering and was pretty good at it - better than I am, that's for sure. 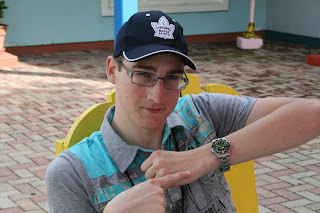 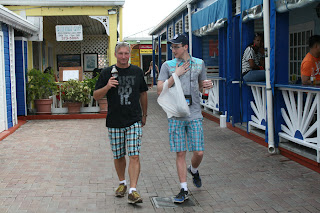 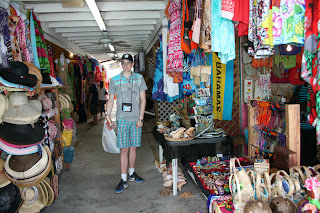 Our last day was a sea-day and we just spent it relaxing. We spent just about the whole day out on the Serenity Deck, which was the adults-only "retreat" when we weren't at the other pool watching Ethan and Owen swim. 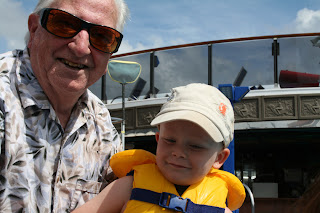 So, I would have to say that I agree with Matt - I miss being on the ship. We all had a great time. As much as I wish Spencer and Cameron were able to be there with us, it was great for Matt (who, as most of you know, has Nonverbal Learning Disorder) to have both John and I all to himself for the week. He did really well, socially (for Matt.) He enjoyed being with everyone and was loved to go to the dining room and joke with the wait staff.
Posted by Barbara at 10:22 PM