Looking back, looking ahead

Last week flew by, once again. I can't say that I was "run off my feet" busy, but it seemed like I was on the go just the same. Fortunately it was a nice mix of fun and work.

Looking back:
-I've been in the spring cleaning mode. Hahahaha! What can I say, I'm always behind. I managed to get to a few tasks on my long list of to do items. It felt good. I'm feeling the pressure of getting to things now before the Christmas rush hits.
-I did a small re-do job on an old, 80s brass and glass table that we have hung onto for some reason. I'll try to remember to post some pics.
-we got our Christmas lights out, changed the burnt out bulbs, and up on the front of the house on Saturday. I like to do it on a warm day when we don't have to freeze up on the ladder.
-I was spoiled this week with a couple of scrapping days with the girls.
-on Wednesday I went to the William Ashley sale in Toronto with Michele and Claudia. I'd never been before so they were giving me a lot of coaching. It was great! I didn't get a lot of stuff, but I would love to go again. Afterwards, we went for a nice lunch and chat. Thanks for the fun day, girls!
-Tuesday was High Rendition Jazz. Spencer isn't in it anymore (because it's for high school students) but Cameron auditioned and got in so it looks like we'll be enjoying this band for a few years yet.
-There was a parents' meeting on Tuesday night for the jazz band
-I'm a little concerned about some "friendship issues" with Cameron at school. I really hope I'm over-reacting
-we're really enjoying attending the new Church in Mississauga and everyone seems to have settled in well, except Matt who takes a lot longer to adjust. We're all enjoying playing in the band. Matt had moved from cornet to baritone, which is a good move for him, but he's still rather anxious about it.
-we went out to lunch yesterday with some friends from Church. It was a lot of fun.

Looking at the week ahead:
-John is off somewhere (I can never keep them straight) on Tuesday for business. He'll be back on Thursday
-I have my big fund-raising crop that I'm doing on Saturday. This is to raise money for Spencer who is off to California in December to march in the Rose Bowl Parade
-I have a lot to do this week to get things ready for the crop ... especially the food
-I need to get some trim around our front door painted
-I plan on refinishing an old wood sideboard
-Spencer is playing in two parades next weekend - the Santa Claus parade in Brampton, and then the next morning in the Santa Claus parade in Toronto. He should get lots of practise for the Rose Bowl parade
-hopefully I'll get a little scrapping done this week.
I've been concentrating on finishing off the unfinished layouts that have been piling up. This one is from last May when both Spencer and Cameron went to Ottawa for Music Fest with their jazz bands. Both bands shared the same bus so they were able to travel together. 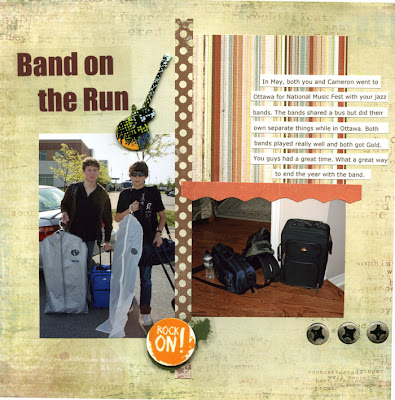