Let me see if I can make this short, hahahaha!

Week one:
Once school was out, we headed staight for the trailer. Cameron's friend was at his cottage for the weekend (which is just down the road from the trailer) and the two of them had a great time just hanging out, swimming, fishing, and just doing boy stuff. On July 3rd we met up with my nieces and nephew (who flew in from Calgary) at Wonderland. Cameron, Emily and Nathan stayed and had a great day of fun and getting reaquainted, while Kathryn and I went shopping and for lunch. I had the best day with her. I really appreciated hanging out with a little girl and doing girly stuff. After Wonderland, the kids came to the trailer to spend the night. 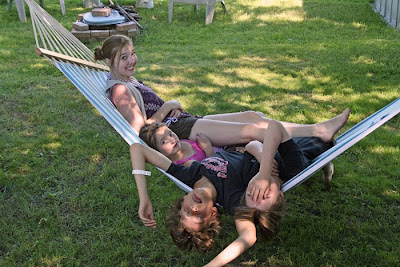 The next day, I drove all the kids up to Perry Sound where we were meeting my sister. She took them (Cameron, Emily, Nathan, and Kathryn) camping for a week at Killbear Provincial Park. Cameron was so excited about the whole thing and spent at least two weeks prior getting ready. He had such a great time. Auntie Cathy, I'm sure Cameron is up for camping any time you want to go.
After dropping them off I went back to the trailer alone (John and the boys went home). My friend Joy came up for a few days to hang out with me. It was so nice just hanging with her, and not having boys around, LOL! No boy smells, no rough-housing, no bathroom humour (OK, maybe we did a little bit of that), just us. Nice.
Then I had to go home and organize 5 of us for the next three weeks - three very different weeks. It took me two full days and I'm sure added a lot of grey hairs to my head.
Week Two
It was time for Junior Music Camp. I always look forward to this week every summer.
This year was different for me. This year, Spencer was a cabin leader. He had the 7 year old boys in his cabin. He did great! The little boys loved him (I knew they would - little boys always love bigger boys) and it was so cute to see them hanging off his arm all week.
It was also different because Cameron wasn't a camper anymore. He's too old for Junior Music Camp so he was a Junior Faculty. That means that he was a helper for wherever he was needed.
He did some babysitting, helped with an instrumental class, helped in a band, did skits for the Bible programme, and had a whole lot of fun. The other Junior Faculty were all his age and they all got along really well. He's already talking about next year.
The Junior Faculty 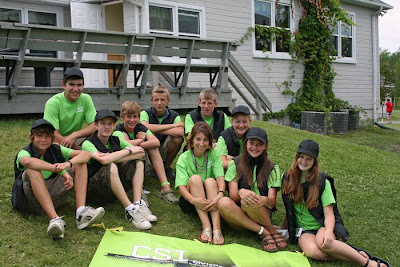 Finally, it was different for me because, due to a change in policy, I was a cabin leader in a girls' cabin - and 12/13 year old girls too! Very different. They were amazing girls and we didn't have a single "friendship" issue. It was so much quieter than the boys' side, but I have to say, the bathroom was just as disgusting - so for those mothers out there who complain about how disgusting boys are ... girls are just as bad (just quieter.)
A very tired Cameron at the final programme at the end of camp. 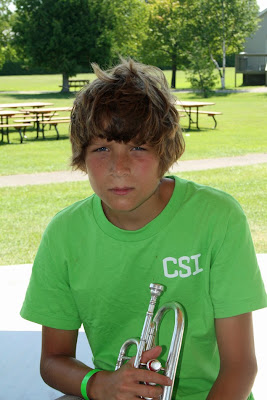