I've been neglecting my poor blog over the past couple of weeks. I don't feel too bad, though, because it seems that things have been awfully quiet all over blogspere - well, at least the blogs that I frequent on a regular basis.

I think my absence was definately related to the amount of time I spent watching the Olympic games. I just couldn't seem to get enough of them. Usually I'm not one to watch a lot of sports, but I think all the hype of having them here in Canada really fired a lot of people up - myself included.
Did you watch that gold metal game last night? We were glued. What an amazing game and exciting finish! I'm just glad that it worked in our favour, not the other way around. Wow!
To catch you up a little on other happenings around here -
-music fest is finished for another year (at least the regionals are - Nationals are in Ottawa in May) All the bands reached Gold level status. The adjudicator had some very nice things to say about Cameron's playing during their clinic for the HJJB. Sorry for the shameless bragging, but it was such a "proud mommy moment."
-Deb and I went out for a girls night out. We went for dinner and then saw Valentines Day - it was a fun night, but the movie was just so-so
-Cameron has discovered MSN and has been wanting to be on the computer constantly. It may have something to do with a certain young lady. So cute!
-Cameron ended up being grounded from computer and his itouch after we found some questionable things he had written on his Facebook - certainly nothing too bad, but something that needed to be nipped in the bud. According to him, I'm very mean. Oh well!
-we were disappointed that we didn't get more snow than we did from that big storm last week. The boys weren't real happy that there wasn't a snow day.
-Matt is off this week on Reading Week. He and John left yesterday for a week in Punta Cana. I was so close to getting on the plane at the last minute with them, but sadly it didn't work out.
-Spencer, Cameron and I will be heading off to Myrtle Beach for March Break at the end of next week. Cathy is going to some with us. It won't exactly be the weather that John and Matt are having right now, but it will be a fun break anyway.
-I haven't scrapped a lot in the last couple of weeks, but I have been catching up on some of the pile of layouts that are sitting waiting for journaling. There was a month-long journaling challenge over at Log Your Memory that I took advantage of and got some layouts finished.
here's a couple:
This one has been sitting in my pile for about a year and a half. This was from Matt's 18th birthday when we went to Niagara Falls. 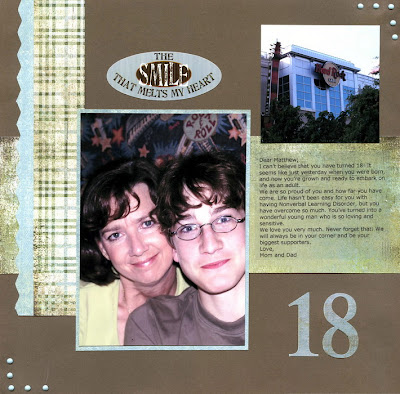 This one is even older! 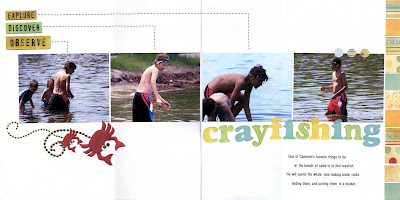