It's the end of another week. Another week of regular, mundane activities of a mother, and wife.

I got home on Monday evening after a weekend of being at camp with my sister and friend. I was exhausted ... although I don't know why. I figured it must have been the drive home because it certainly wasn't the abundance of activity I did over the weekend, or lack of RR!

I decided to stay home on Tuesday and try and get caught up on things around the hosue. I wasn't too successful.

Mom's taxi was in constant motion again with trips to drop off boys for practises, schools, and errands.

I've been watching American Idol again. I never used to like the show, but got sucked in back when Taylor Hicks was on. I'm not overly impressed this year, and the only draw for me is Ellen.

The Halton Junior Jazz Band started their playing engagements this week. They did a half day of school tours. I went to see them at one of the schools as I hadn't heard them play yet this year. I was pleasantly surprised.

Last night we watched the opening of the Winter Olympics. Matt had wanted us all to watch, so we made a night of it. By then end of it, I was sitting alone in the family room, Matt was upstairs watching on his TV while on the internet, Spencer, Cameron, and John all went to the basement to watch it on John's big screen. I don't like watching in the basement, so I ended up alone.

Today we're off for another band concert. (the playing season has begun, LOL). This one is with Cameron's divisional youth band and they are playing at a youth festival.

One of the layouts I managed to get done this week was this one for the Sweet Talk, and weekely challenge over at http://logyourmemory.com/. This documents my love hate relationship with my computer. It was a quick layout using Bisous PDQ line. All I had to do was all the journaling and the title! 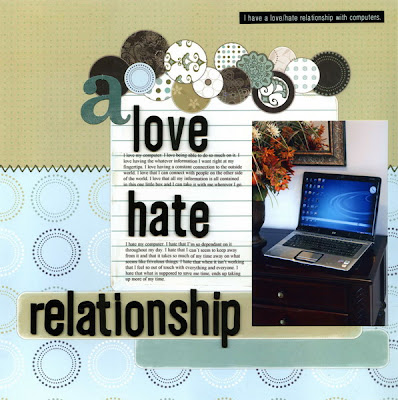