A Freebie for all my scrapbooking friends 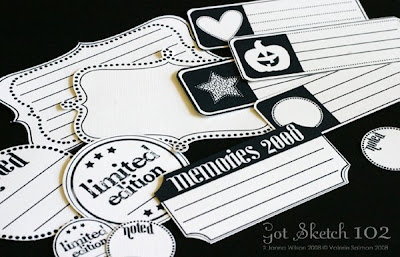 Want some printable designer labels for your layouts? How cool are these? The best part is you can print them on whatever colour you need, and as many as you need. Very cool. Go HERE for the free download.


Cameron and I are at the trailer now. We came up on Tuesday. You won't believe what we went through to get up here. We decided to leave the house at around 2 p.m. after packing up while storms were all around us. (Tuesday was a day filled with one storm after the other.) We left and got on the highway. About 15 minutes later I realized that I had left my purse at home. So we turned around and went back.

We get my purse and head out again. Just before getting on the highway we were listening to the weather. (at this point Oakville had been spared from all the storms) There was a big storm heading straight towards Oakville that included 90% chance of tooney-sized hail. Spencer, who was staying home this week, was supposed to ride his bike over to his piano lesson. Being a good mother, and not wanting to be called back because my son had been hit by lighting (or had a head injury due to being pelted with hail) I turned around and went back home to be there to drive him to and from piano. What a good mother I am!

So, now it was 6 p.m. and I get Spencer home from piano, and Cameron and I are ready to head out again. Well, John calls from the Go Train. He is stranded on the tracks in Toronto and they are telling everyone to get off and find alternate travel arrangments. (Something having to do with flooding of the tracks and a sink hole or something. ... I mean, come on. Speed that train up and fly across the hole!) So, I had to then head into Toronto to pick up John and get him back home.

Finally, 7 p.m., and Cameron and I get in the car and head to the trailer. Finally.

By 9 we were there and had started to unload. That's when I realized that I had grabbed the wrong keys for the trailer. You have got to be kidding me! After all that, we couldn't get into the trailer. So, what did we do? We broke in. We broke through one of the small storage compartments that opens into a cupboard on the inside.

Sorry, John. You have a small repair job to do.
Posted by Barbara at 12:07 PM