The Saga - part one

OK, so this part isn't the actual trip, but it's leading up to it.

As I stated in a previous post, our van was getting sicker and sicker. We were having some issues with it. Last fall we started looking around to replace it, but it would seem that no one was wanting to give us a decent trade-in for it. Actually, they basically didn't want it at all. ...that may have had something to do with the fact that it had 240,000 KMs on it, and that the honda oddessy has been notoriously bad for transmission problems. So, we decided at that point that we would just drive it until it died (or until we needed to put money into it to keep in on the road.)

Well, as luck would have it, right before leaving the back brakes all of a sudden wore away and we had metal rubbing on metal. We had to make the painful choice to get a new vehicle. So, we spent the day on Saturday (instead of packing, getting our banking done, and doing other arrangements) car shopping. It was very nerve-racking for both of us. We've had both our vehicles for over 8 years. Anyway, but the end of the day on Saturday, we purchased a lightly-used but fully loaded Crysler Pacifica. It is one sweet ride! ...and I'm so happy not to be driving a mini van anymore! 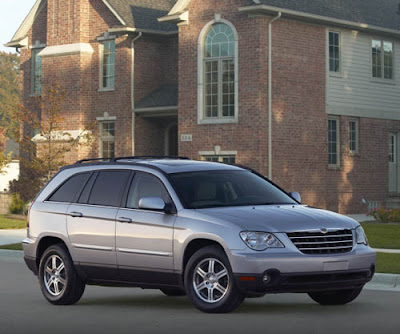 I'm so glad now that we got it, but it was really stressful to have to go through that right before leaving for our vacation. I'm sure that for the first few days of our trip John was replaying the whole thing over and over again wondering if he got the best deal he could have.