So bright and early Monday morning we made our way to the airport and borded a plane to the Domincan Republic. We had a good time while we were there. The weather for the most part was good. We had one day of rain which kept us indoors. All the other days we had about an hour's worth of rain in the afternoon but we were still able to enjoy the rest of the day.

The boys had a good time. When Cameron wasn't swimming, he was doing what he loves most - exploring and hunting for critters. We lost count of how many lizzards he caught. Spencer said he had a good time, but to us he looked bored. With him it's hard to tell as he's usually more quiet and enjoys his own company. Matthew was the one who really surprised us. Since he has Nonverbal Learning Disorder, social settings and crowds tend to overwhelm him and he withdraws to his gameboy. Our first full day there he started off sitting around the pool in the shade reading his book, but after a short while he joined a water polo game in the pool with a bunch of other guys. After that point, we hardly saw him for the rest of the week (except at supper time). He hung our around the pool meeting people his own age, playing games and chatting. Every night at around 10 p.m. he went out to the Disco until about 2 or 3 in the morning where he said he met a lot of people. After the first night at the disco he told me that it was one of the best nights of his life. We were so thrilled for him and it was so reassuring to see him interact so well (well for him because there was still a lot of quirky mannerisms and behaviours) with his peers. 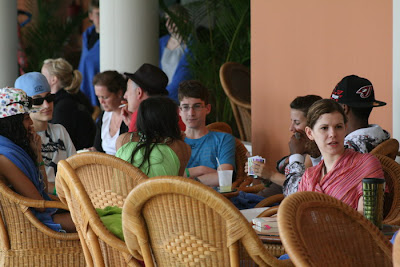