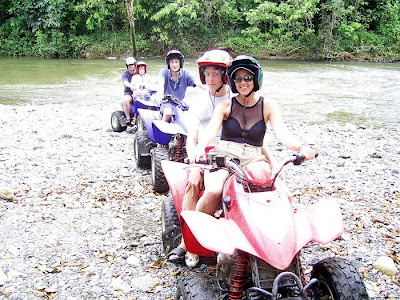 We decided to do a couple of the excursions in the Dominican Republic and one was an ATV trip. It was for two hours through the Dominican countryside. We took three ATVs out along with a couple of guides who lead us to different spots. We all took turns driving and everyone had a blast.

At one point John and Cameron were riding together and somehow managed to drive off into the ditch. I took great pleasure in snapping some pictures and other than some scrapes from some barbed wire, all that was damaged was John's ego.

Near the end of the trip we were starting out on the main road to head back to the hotel. It was an easy stretch of road as it was paved. We decided to switch drivers one last time. As we headed along the main road we were coming up to a small bridge that crossed a creek. Cameron and I were at the end of the line and all of a sudden we see Matthew and Spencer veer off the road and over the emankment. Talk about freaking out! Apparently Spencer said something into Matt's ear and Matt turned to talk to him and steered right off the road. The drop was about 10 to 15 feet. Matt ended up in the creek very shaken and Spencer managed to grab onto some fallen trees on the way down. Both boys were OK (thanks to the helmets they were wearing) but their legs were pretty cut up.

The ATV didn't fare so well. It ended up upside down in the water under two fallen trees. It took 5 men and 20 minutes to pull, push, lug, and tow it out of the water.

Poor Matt was so upset with himself for what happened.

One day we will laugh about it ... but for now we still are in shock over the whole thing and just how lucky they were not to have been more seriously hurt.
Posted by Barbara at 9:20 AM