Junior Music camp is over for another year. The week flew by and as usual, I came home very wet, and very exhausted.

This year I was back with the boys. Joanne and I counselled the second oldest boys cabin. the boys were 10 and 11 year olds and they were all great. We really enjoyed all 14 of them.

Spencer was a Junior Faculty again this year which means that he earns his community service hours by helping out where ever needed during the all the programmes. He really enjoyed himself this year ... he particularily enjoyed spending time with the junior faculty girls (and from what I hear, it was mutual.) 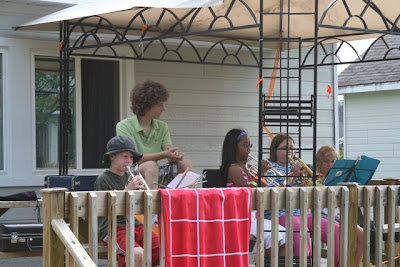 Cameron had a blast this year. He was in the oldest boys cabin again and had so much fun. By the second morning he had lost his voice and could hardly speak. Several of the faculty told me how impressed they were with Cameron in how helpful he was and how he stood up for the underdog. In one situation Cameron was trying to calm a group of boys who were ganging up on another boy. It`s so nice to know that some of what we talk about at home is sinking in, LOL!

On the last night of camp some of the faculty head out when the cabins are quiet and have a huge water fight that goes on until the wee hours in the morning. Almost every year some of the oldest boys and some of the oldest girls sneak out (it`s almost a rite of passage before moving on to Senior music Camp). This year was no different. A few of the girls were seen sneaking out and were followed by some of the faculty and then were soaked by the water guns, sending them running back to their cabin. The boys cabin also went out, but only four of them made it before the fifth one was caught in the window. Guess who was caught ... that`s right ... my boy! When the counsellor heard them, she leaned out and saw someone in the window and yelled out. Cameron scurried back through the window and into bed. (the other boys were found a short time later, were put in front of the faculty firing squad, and then sent back to bed.

Cameron escaped the punishment the next morning of having to clean the girls washroom as he was the only one who was honest and admitted that he was going out, even though 8 of them were planning it.

What a kid! He has asked me to be his counsellor next year and then stated that if I am, and I happen to see some empty beds during the night, to ignore it. Yeah, right!

This is Cameron 3 hours after camp finished. He crashed on the couch in the trailer and stayed like this all night. 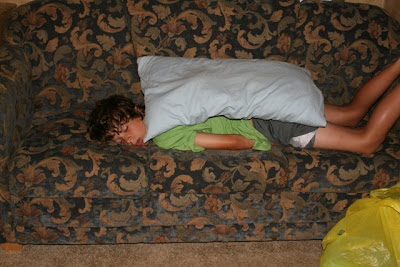 This is just over half of this year`s faculty. 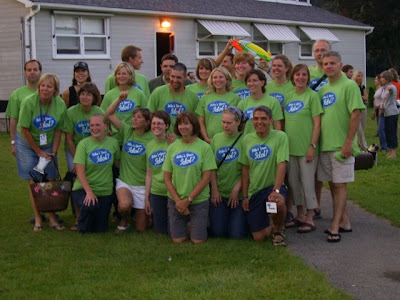