I love a good storm at Jackson`s Point

We have the best summer storms at Jackson`s Point. There are so many memories of riding out some great thunderstorms, and possible tornados there.
This year at Junior Music Camp we saw some very dark sky off in the distance. Carrie and I decided to wander over to the trailer park and put in our awnings because the awnings never fair too well in big storms. Within several minutes of us both getting our awnings in, the sky started to light up. The campers were just finishing the morning programme when it started to pour.
For the next 15 minutes we were all holed up in our cabins with kids, unable to do anything, watching the incredible storm outside. The thunder and lightning was constant, and we even got some hail. After about 15 minutes, the storm had moved passed, but it was still raining heavily. Some of the kids and faculty had been stranded around the camp and were unaccounted for.
The camp was flooded by water and we were ordered to stay inside. After everyone was found and returned to their cabins the rain finally stopped and we were called for lunch. When we came out this is what we saw: 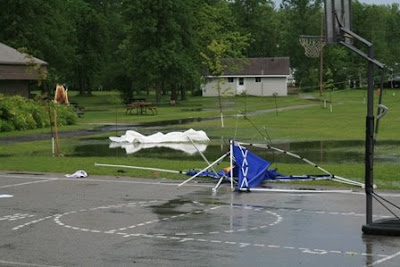 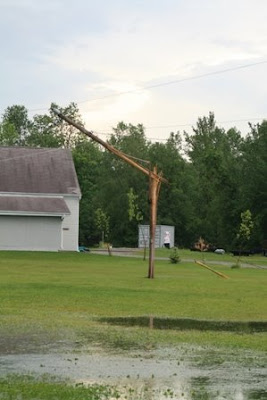 There was debris everywhere and trees down. There was a big tree that snapped in half and came down right on top of the power lines causing the camp to be without power for 24 hours (which in itself was a very exciting thing for the campers.)
Across the road on the Conference Centre side, a few trees were down. Fortunately none of the big trees landed on any of the buildings and no one was hurt. 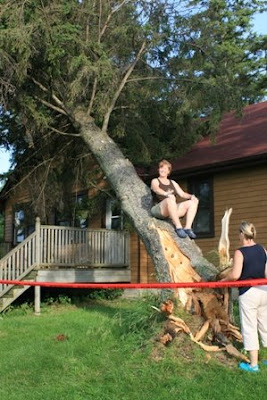