He's going to be a man soon. 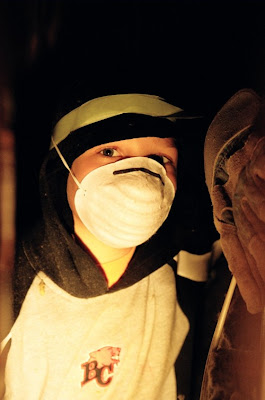 John and Cameron have been very busy together installing a new satalite dish. Since the basement is finished, this proved to be a bigger task than they had anticipated. But ... Cameron was up for the task. He and John had to do some rewiring in the basement which meant going up through the ceiling, around walls, through unfinished area. Cameron worked beside John for two days to get the job done. He was happy. He was doing what he loved best, with his favourite person.

The last part of the job was for Cameron to squeeze in behind the wall, taking the wire to where the TV was on the other side. He was so up for the challenge. He loved it. John had him all taped up so as to keep the insulation from getting onto his skin. It was about this time that mean Mom came downstairs and announced that it was 10:30 on a school night and that he needed to get into bed.

Cameron looked at me and said with determination, "Mom, I'm gonna to be a man soon!"