I know, I know. I've been bad. I've been neglecting my blog in the past week or so. I don't really have an excuse, except sheer laziness! I will try and catch you up so get a coffee and get comfortable. It may take a while.
Pat and I went to Lake Harmony, Pennsylvania to the Scrapping Away Vacations retreat. We left on Thursday from Oakville around 5 p.m. We were very fortunate in that there was very little traffic tie-ups. In fact the only slow down was through Oakville and Burlington on the QEW. From then on it was smooth sailing (at least road wise.)
We made a stop in Buffalo to go to Joann's Etc. and then to grab some supper. Much to our surprise there was a Swiss Chalet there and thought that would be a quick place to eat. We should have known better because as soon as we walked in the restaurant it had an odour to it. I can't really explain it except to say that it smelled like my Grandfather's basement ... you know, that musty, yet anticeptic smell? We learned a very valuable lesson ... don't eat at Swiss Cahalet in Buffalo. We ate quickly and got back on the road.
We drove for about three hours ... all the while I kept experiencing supper all over again. It kept repeating on me. Somewhere around 11 p.m. we pulled off to get some gas and I ended up being sick in the parking lot of the gas station. It was quite gross and I kept telling Pat that I never get sick and thought it was what I ate.
We tried to drive on, but soon it became clear that we would just need to stop for the night. We found a very nice, new hotel with great beds and crashed. I was feeling better and so I slept great, and in the morning I was completely fine. Whew!!!!
We only had to drive an hour more to get to the retreat. We arrived, checked in and set up our stuff. We didn't get our room until later in the afternoon. Our room smelled like fish (which we figured out later that it must have been left in the fridge because it really smelled bad.) and the heat didn't work. It was a good thing that I didn't have to sleep there the night before or I may have had some real problems.
We met and cropped with the ladies from the Cherished Scrapbooks forums. It was so much fun meeting them and getting to know them in person. We all felt like we've know each other forever. 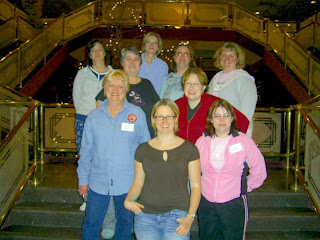 These are the ladies from Cherished Scrapbooks online community, and Ali Edwards who was gracious enough to pose with us for some pictures.

We spent the weekend just scrapbooking, eating, laughing, and relaxing in the hot tub. What more could I ask for? 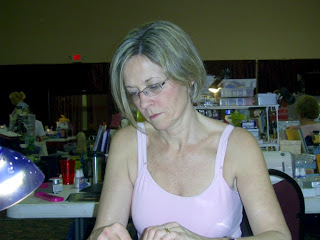 Both Pat and I couldn't get over the amount of stuff that alot of the ladies brought along with them. I thought I had a lot of stuff, but wow! It seems like they brought everything they owned. The table beside us was piled so high with stuff!! Check it out. 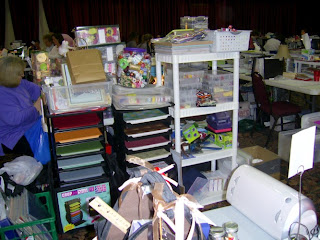 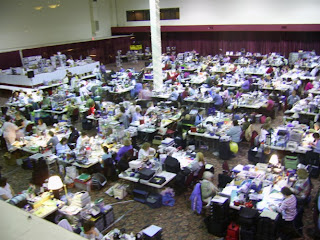 The drive home was a little smoother than the ride down ... and we made it a point to avoid the Swiss Chalet in Buffalo.
My week last week was basically spent trying to keep up the scrapbooking momentum and trying to get things unpacked and reorganized. ...and of course, trying to get caught up with all the online stuff and blogs.
John was away all week in Barbados (yes he went without me) and while he was soaking up the rays and having poolside meetings, I was cracking the whip at home with exams starting and a summitive that needed to be completed and handed in. Now all that is done. Both Matt and Spencer are finished exams and they have the rest of the week to themselves. Friday is a PD day so Cameron will be home too.
Posted by Barbara at 10:59 AM