It was a fabulous week away. I had so much fun hanging out with my scrapping buddies. We left at 6 a.m. Monday morning. It's about an 8 1/2 hour drive from Toronto but the drive took us 15 1/2 hours! We had to make some shopping stops along the way, then there was lunch, and supper, and pee breaks, and traffic. I was so glad to finally pull up into the Chalets and unpack all our stuff.

We managed to do a little touring, a lot of shopping, a lot of scrapping, and some of the ladies hit the spa. The leaves have already peaked there and so the views were spectacular.

I even managed a week away without too much drama going on at home. The only event was Cameron's leg (which he fell and had a small poke hole on the front of his shin that was infected before I left, but there were trips for exrays, trying to track down a specific dressing that the doctor ordered, another trip back to the doctor and more antibiotic. ...it looks like it's on the mend now ... which is good because otherwise he was going to have to have plastic surgery on it!) The boys fared well. Cameron tells me that he didn't even miss me, but I don't believe him.

While the week was way too short, it's good to be able to get things unpacked and organized again. We are definately going to make this a yearly event and next time it will be a full week.

I managed to get about 21 layouts done. Here's one of them: 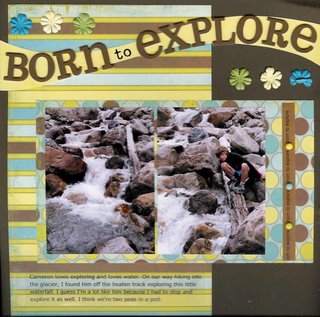