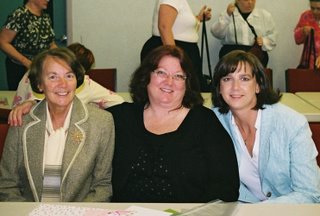 So I finally got the film from Mother's Day developed. (yes, I know. I can hear all you digital people yelling at me through the screen. I'm just not ready yet to make that leap!) These pictures are of Mom, Cathy and I at the mother/daughter banquet that we went to in London. The theme had something to do with scrapbooking and part of the evening was spent making a photo card. Cathy and I had to take some pictures because my mom DOESN"T SCRAPBOOK!! Her idea of preserving memories is just to throw them into a cardboard box and store them in the basement! Arggggggg! 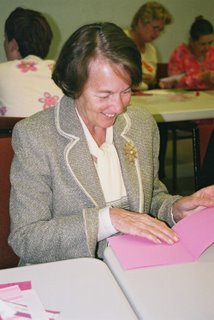 Here it is! The picture of all pictures. Mom scrapbooking! Do you think we can convince her to dig out those boxes from the basement?? 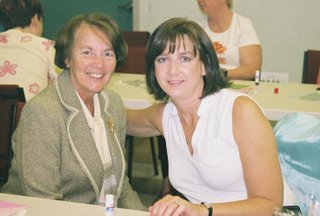 So last night we went to Philthy McNasty's for supper ... Matt's choice. We had a fun night of playing foozeball, pool, and watching some of the world cup on TV. The food was pretty good, and there wasn't a speck left on the table when we were done. My boys devoured everthing that was put in front of them. Someone needs to teach them some manners!

When we were done eating we gave Matt his present. I tried to disguise it by putting it in a big box with lots of socks and underwear. I think he knew anyway, because he wasn't even phased when he saw the underwear on top. He just dug down for the real gift. He was thrilled. Funny thing is that after I played with it for a while, I thought that I'd like to get one for myself. (I certainly don't need one ... I'll just borrow his! Alot!)
Posted by Barbara at 9:58 AM