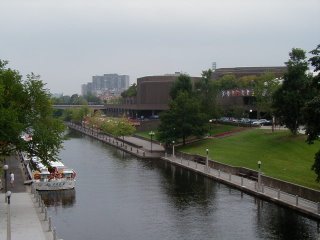 Well, I'm home after a very busy couple of days in Ottawa. Spencer was there with the Halton Junior Jazz Band and I went along as a parent chaparone. We were only there for two days, one night and so there was a lot of activity crammed in there. We left at 5 a.m. on Tuesday morning. The HJJB had to be there at noon to practise, change and then perform at 1 p.m. Then there was the adjudication and pictures. They played so well and ended up with a Gold. The judges were blown away by the ability of these 13 year olds.

We were there with the Director's home school as they were also there to perform. They did their bit on Wednesday, so while they were busy with that, we were able to take the HJJB kids out to Parliment Hill and the Rideau Center for lunch and shopping. I was able to meet a good friend, whom I haven't seen in about 3 years, for lunch. It was great to meet up with her and catch up on things. It's like we were back in Barbados, sitting around the pool yacking while the kids played. I miss those days!

When the other group finished their events (they got Gold too) we all loaded back ont he busses and headed back to Oakville. It was midnight when we finally arrived back home. We were totally exhausted but elated after a fabulous trip and two Golds. I don't think too many of the kids went to school today, but Spencer had to as he has a performance tonight with his own home school at Band Share. The HJJB will be playing at that as well.

I don't think I will ever tire of hearing him play his instrument!
Posted by Barbara at 4:49 PM