I know, I know. Halloween was a week ago, but I'm still trying to catch up on my BLOG. I'm such a busy girl, ya know!!! 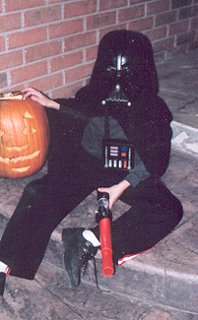 Cameron decided to go out as Darth Vader for halloween this year. (him and every other nine year old boy.) He was so excited about going out but surprisingly was happy after just going around the block. He decided to make Dad happy and go out again.

And what is it with 13 year old boys???? He's too cool to "want" to go out trick-or-treating, but inside he really wants to go. He's too cool to dress up, but mom says you can't trick-or-treat unless you get into the spirit of it. So, half an hour before going out, he drags out the costume box and throws something on. After piecing together a bunch of different things he tells me that he's going out as a ghost pirate. I dropped him off at his friend's house and he went out with a group. Mom said "show good judgement" knowing what can happen when the group mentality kicks in. He did. I was so proud of him. He called me after about an hour to come and pick him up because one of the boys was getting loud and obnoxious and rude. 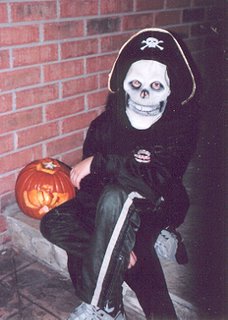 Matt shelled out for a while, all dressed up to "scare" the kids. Then he wanted to go out. At 15 there's still a little boy inside. I let him go out with Cameron and Dad for round two and then he went out by himself for a while. I really wish he had a buddy to do that kind of stuff with.
Posted by Barbara at 10:15 AM