While we were away in Myrtle Beach we had to make the rounds of all the tourist beach stores. Most of the stores sold hermit crabs and lizzards. Cameron loves anything that moves and so as soon as he saw these, he started asking if he could buy one and take it home. They weren't that expensive so we said that on our way out of town we would stop and get one. I was voting for a lizzard as they were at least cute. The crabs were very ugly. He really wanted a crab. After spending a few days thinking about it, I figured a crab would be better because he could hold it and if it ever got out, it would survive the cat better than a lizzard. I made everyone aware of the fact that I would not be going near these things!

Well, the crabs were only a $1 a peice, and you actually got one free if you purchased a little plastic cage, which of course we needed. Crabs love company, so we had to get two. Then we needed food, and a hermit crab care book. Now we are at $20.

We read the book on the way home. We learned that they would need an aquarium, climbing toys, sand, food dishes, etc. We purchased an aquarium, sand, and gravel.
The first thing he had to do when we got home was set up this crabatat! Well, guess who did it all.

$1 crabs turned into about $40 so far. We have since been to the pet store and seen a few other things that we need to get to keep these things happy.

The worst part of the whole thing is that they have kinda grown on me. They are actually kinda cute. ...and, as usual, I'm the one who ends up taking care of them! 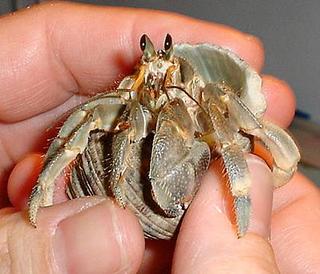