First let me apologize for these lengthy blog posts. I'm usually not this wordy. I'm sure this is akin to me inviting you over to watch home movies. However, this is my blog - LOL! Really, though, I want to make sure it's documented so that I have it when I get around to getting the pictures into the scrapbooks andI find my memory not what is used to be.

After those two amazing "Fun Days as Sea" the weather did clear when we pulled into the Port of Dubrovnik in Croatia. I had heard that this was one of the best ports and so I was really looking forward to it. It did not disappoint!

When we first woke we were just coming into Croatia. The skies were blue and the sun was shining so we were pretty excitied. We had ordered room service  the night before, so we were able to quickly eat and get ourselves ready. While we were waiting for the ship to dock and for it to be cleared for debarkation, we went up on deck to enjoy the beautiful views. 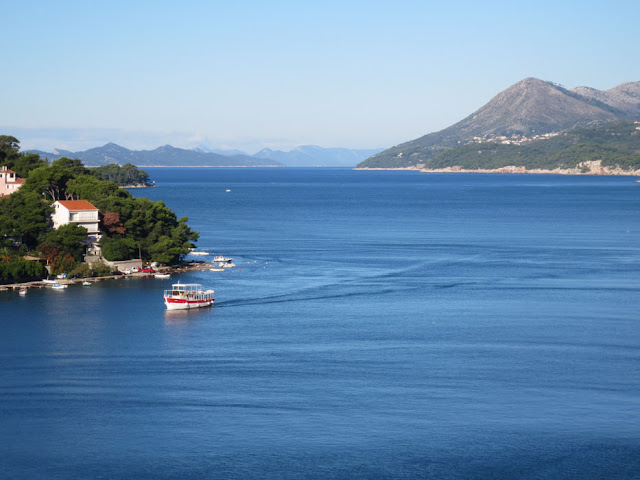 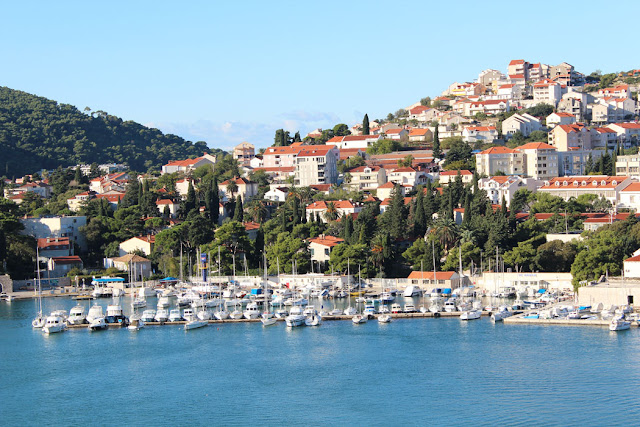 Our plan for that day was to just explore on our own. Once we were allowed to debark, we jumped on the shuttle bus that would take us to the Old Town.

From dubrovnik travel.net:
Jutting out into the Adriatic Sea with a backdrop of rugged limestone mountains, Dubrovnik and its Old Town is known as one of the world’s finest and most perfectly preserved medieval cities in the world. For centuries, Dubrovnik rivalled Venice as a trading port, with its huge sturdy stone walls, built between the 11th and 17th centuries, affording protection to this former city-state. Today, these walls still enclose Dubrovnik’s historic centre and it is possible to walk along them to enjoy the best views of the ‘Pearl of the Adriatic’ and the surrounding lush green islands. Dubrovnik’s Baroque churches, monasteries and palaces; its Renaissance fountains and facades, are all intertwined with gleaming wide marble-paved squares, steep cobbled streets and houses, all of which have also remained unchanged for centuries. 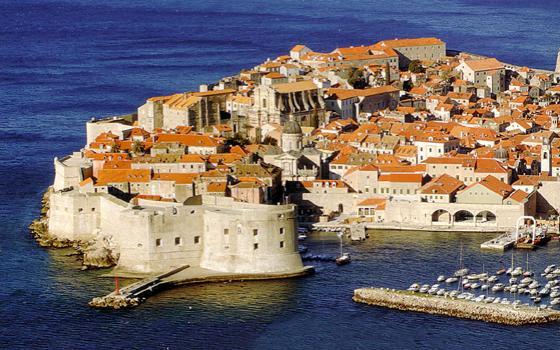 We spent the morning walking on top of the wall around the Old Town. It took us two hours because it seemed that every 30 feet we had to stop to take pictures. It was so beautiful. Before going, we had learned that most of the old town had been damaged during the Serbian War in the early 1990s. They told us to look for the orange roofs while we were walking the wall because they were the buildings that were all rebuilt after the war. Most of the roofs were orange. Very sad! 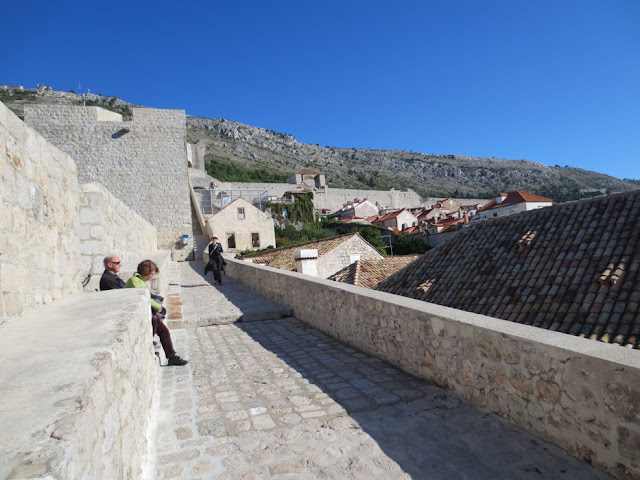 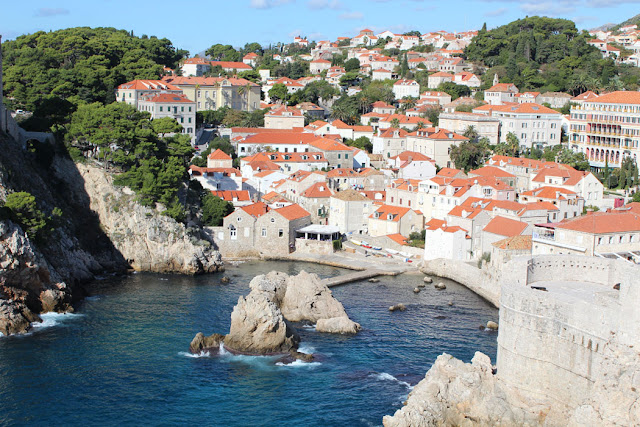 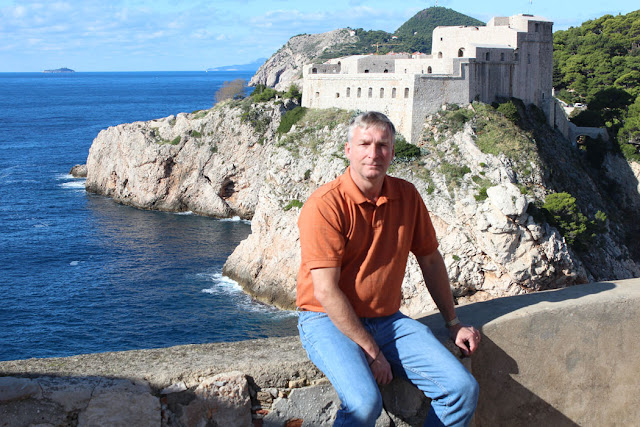 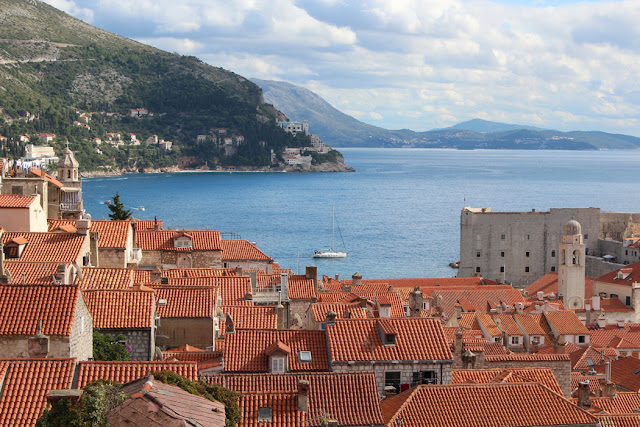 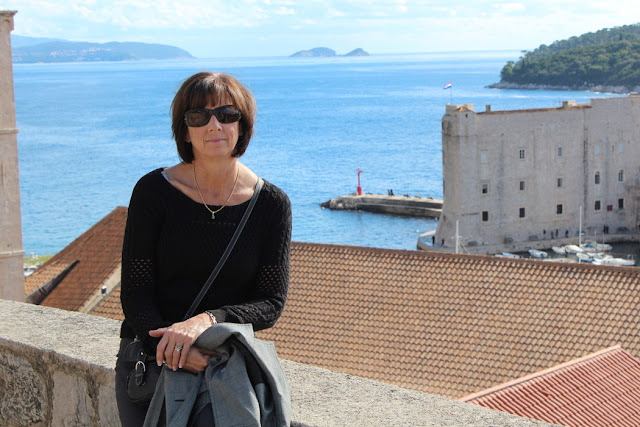 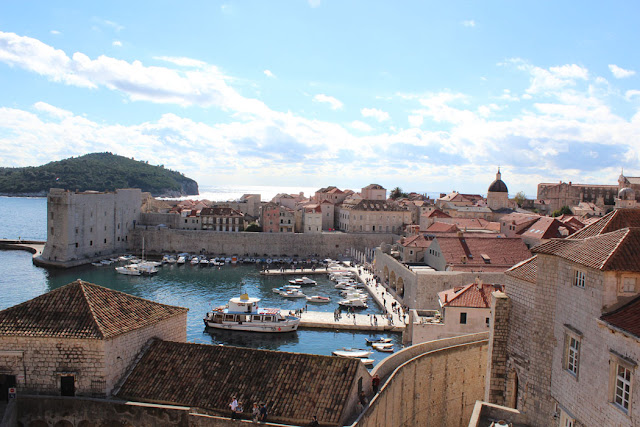 After walking the wall, we spent the rest of the day having lunch in the old town and walking the streets, and browsing some of the shops.  The steets were so narrow. No cars are allowed inside.
Two things really struck me as we walked around - one being how many ferral cats there were and the second being how dark it seemed inside the walls when we wandered off the main streets - due to the streets being so narrow. 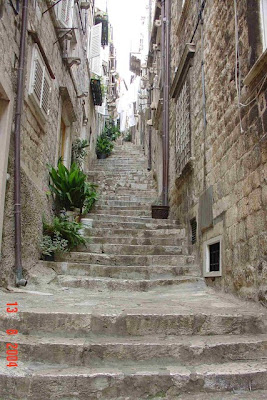 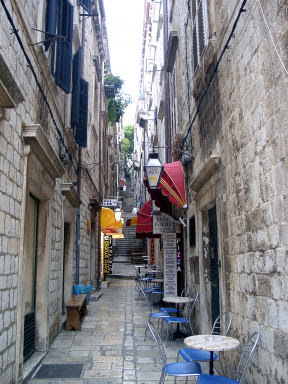 We hated leaving this port because it was so beautiful.

Shortly after we pulled away from Dubrovnik, it happened again. "Ding Dong" in the cabin! Noooooo!  This time the cruise director had to deliver the dreaded news. Venice was flooded. Everyone in Venice was walking around in hip waders. Or port for the next day would be cancelled. We would now have two more "fun days at sea!" (are you seeing a pattern here?) She did have a small bit of good news in that our port of Messina would be reinstated - but our overnight in Venice was not meant to be.