After today, all I can say is that I'm glad I don't have a teenage daughter!
Cameron and I headed off to the mall this afternoon as he was in need of a new pair of shoes. Next week he's in Rochester with his school's robotics team, and then we leave right from there to go on vacation, so I figured that while we were there we had better get him some new t shirts and a couple of new pairs of jeans since he's outgrown a lot of his clothes.

Usually when I suggest a trip to the mall to any of my boys they run and hide. My first hint should have been Cameron's willingness to go.

After a quick bite to eat we hit the stores. I was quite happy because we were finding some decent sales on the things that he was needing - t shirts and jeans. Then it was time for shoes. He suggested that we go to West 49, saying "I'm pretty sure they have shoes".  He went straight to the back of the store and started picking up shoes that he liked ... almost like he knew exactly what he was doing. Skate board shoes. That's what he was wanting - even though he doesn't even have a skateboard. Not just skateboard shoes, but colourful ones.

There were some sales on so and the ones he wanted were $40. Great. None in his size. Next pair, same thing - good sale, not his size. I think we must have when through 3 or 4 pairs like this, sending the sales guy back into the store room to check for his size. None.

Then he picked up a pair. They weren't colourful, and they weren't on sale ... but they had his size. He tried them on, and loved them. Let me just stop to say that we've never spent $100 on a pair of shoes on ourselves ... ever ... or on either of the other two boys ... ever. Well, he caught me in a weak moment. I was tired of shopping, we needed to find a pair of shoes, and they made him happy.

We walked out of the store with them. 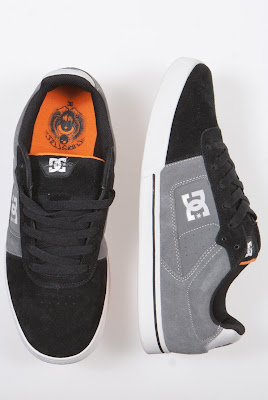 They're not colourful (except the inside) so now we need to search for orange or tourquois shoelaces!

I'm so glad I don't have any teenage daughters. I don't think I could do this again for quite sometime. I'm exhausted! (and the bank account is empty now!)