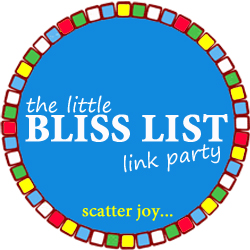 It's coming to the end of another week ... one that I can't seem to find my energy. It might have something to do with the fact that I was away with the teens from our Church last weekend on their Youth Retreat. Sleep was definately on short supply, but everything else was amazing.

So, on to my moments of bliss:
What's on your little Bliss List this week? Why not come over to Liv Lane's and share yours.