Can you believe that July is history already? I usually look forward to a more relaxed summer, but I just haven't really had any time to catch my breath yet ... Ok, well, maybe a few days sprinkled here and there.

July 1 - We spent the day at Queens Park in Toronto for their Canada Day festivities. Cameron's jazz band, High Rendition Jazz, were invited to play there in the afternoon. Since one of the trumpet players was away, Spencer played with them as a fill-in. I have to say I really enjoyed watching two of my boys playing side by side together like that. I don't think I could ever get tired of seeing that. 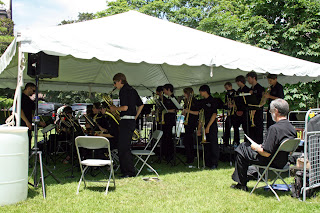 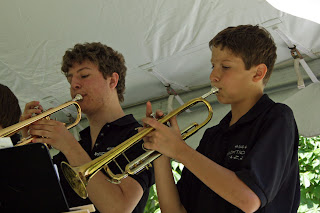 Later that day we went up to the trailer. John and Spencer were only able to stay for the long weekend, and Cameron and I stayed on for the week.

July 9 - we had to come home for another High Rendition gig on the 10th and then we went back up for a few more days.

July 13th it was back home for appointments, a meeting, organizing for the next three weeks, and trying to fit in a couple of lunch visits with friends.

July 16th was the start of Music Camp. Each year I volunteer as a cabin leader and music instructor. This year I had a cabin of 9 and 10 year old girls. The girls were great and all got along well together. With the minor exception of a night of tears caused by a BUG it was a successful week. I even had one camper who has Nonverbal Learning Disorder (among other things) so it was very interesting to see similarities to Matt.
Cameron was a Junior Faculty again this year and he had a blast. There were 5 Junior Faculty and they all got along really well and had so much fun together.
Can you believe I didn't take one photo? When I get a photo CD I'll try to post some pics.

July 23 - Music Camp ended at noon. After a short visit at the trailer to see my parents who are using it for a couple of weeks, and to repack some clothes, Cameron and I went home. We were only home long enough to organize Matthew and Spencer, repack some things, and grab John and then we were on the road again, headed for Tennessee.

July 24th we checked into our cabin rental (as seen below). We had a very nice relaxing week there. More on that later.

July 30th we left Tennessee and drove to Myrtle Beach where we will spend the next week, relaxing some more.

This is our view today: 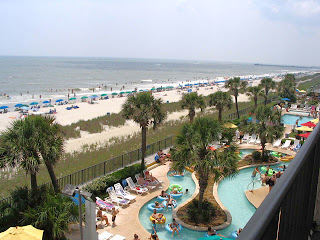 Wish you were here!
Posted by Barbara at 5:03 PM