...and I have no excuse for my lack of blog posts lately, except for the continued blog funk that I seem to be experiencing. I wonder if it has anything to do with the weather.

I guess there's also a lack of things to share here. Nothing overly blog worthy going on.

-we opened the trailer on the May long weekend. It felt so good to be up there again. The weather that weekend was supposed to have been rainy, but it ended up being a nice weekend. Matt had to work, and Spencer didn't want to go so it was just three of us. I don't think I'm liking this. It's going to take some adjustment.

-I can't believe how much I was/am still affected by Oliver's passing and how much we're missing him. He was such a sweet boy.

-John and I are still on the 17 Day Diet. We're on Day 45. I've reached my goal but I'm still trying to stay on it for John's sake who still has a way to go. He's lost over 20 lbs! I'll do a review of the Diet in a separate blog post.

-is anyone else really tired of all this rain? Matt and I managed to get the front gardens done last week on the only nice day we had. We still have the back to do. It looks like the weather is about to change so that's good news. I want to get back out to finish the back this week.

-John's sister-in-law passed away a couple of weeks ago. It was sudden and very sad.

-our annual family reunion was yesterday. I love getting together with family. We had a great time. Cameron was happy to get some fishing in and actually caught a couple of fish. He must have got a bug bite on his eyelid because now his eye is swollen almost shut.

-is anyone else tired of all the "Oprah says farewell" talk?? Is anyone else happy to see Oprah's show end?  Since when did Oprah become god? how did that happen?

Even though I've been in a blogging funk, I've still been creating.  I have lots of layouts cued up on my computer ready to share. Here's a couple:

This one is of Tobacco Bay in Bermuda from our cruise last summer. I used one of Alison Davis' sketches from her sketch book series. I really love those books! 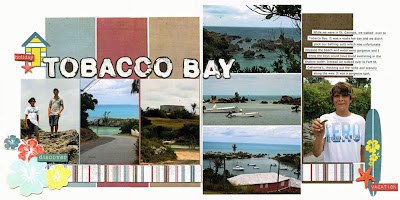 This one is from this year's robot build. The robot is all bagged, tagged and ready for the competition in Rochester. Cameron is sitting on the fork lift that he and another student built to carry the robot. 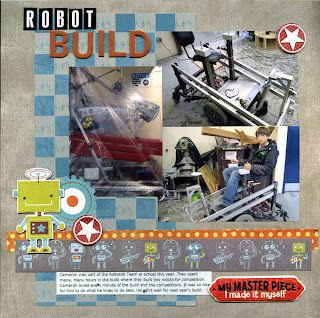