Yes, it's true. I've been very lasy this week and have been putting off posting an update.
We got back Monday afternoon from our trip to Mexico and I feel like I'm still in vacation mode.

Our trip was fantastic, although it felt so strange to go away with only one of the boys. Spencer has a different week off school, and Matt had to work, so Cameron had the benifit of being an only child for the week.

We went to the Mayan Riviera, and stayed at the Gran Bahia Principe. The resort was HUGE!!! There are three sections to it and we stayed in the Akumal section. Fortunately they had a tram system that would take us anywhere we wanted to go around the resort.

We did a lot of relaxing mixed in with some sight seeing. We spent a day touring the Mayan ruins, another day at a nature park where there was a lot of snorkeling, and went into Playa Del Carmen one evening to walk the streets and do some shopping.

Here are just some of the highlights of the week. The first picture is of Cameron and I all dressed up to go to dinner at one of the a la carte restaurants. 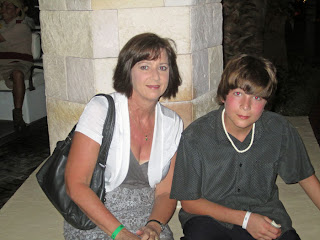 Cameron made a fast friend while we were there. He met this cat down by the beach bar one evening and spent some time with him. We were amazed when the cat found our room the next day and was meowing for him at the window. The following morning he was there again, and sat with Cameron like this for about an hour! 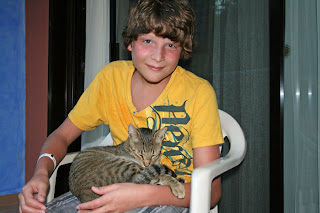 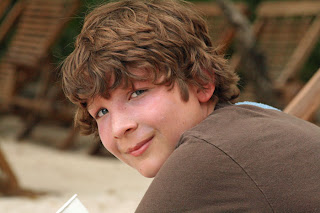 There were a lot of hammocks all over the place. So relaxing! 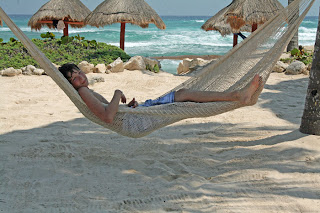 John and I at Tulum. 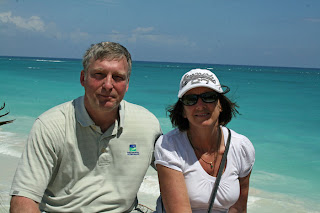 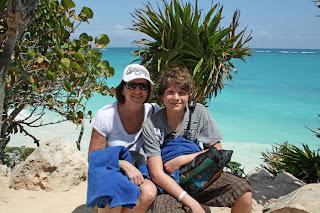 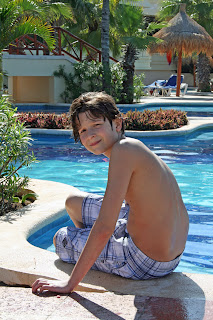 I couldn't get over all the Iguanas! They were everywhere and not too afraid of the people either. 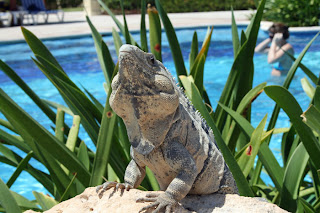 We had the best week. I was a little nervous about leaving Matt at home by himself. I called and checked in every day (which was probably not necessary). He did well, and I know he loved having that independence for the week. He even managed to keep track of the days and make it to work on time, as well as taking care of our poor sick Oliver and getting his medication into him (which is a huge feat!)
Posted by Barbara at 9:59 AM