A week in review

Another week is quickly coming to a close. It was a pretty ordinary week for me.
-Cameron had another full day of school tours this week. I'm starting to become a little fearful that he's going to be falling behind in the school work with all the days he's had off in the last little while. He tells me that he's not, but I'm still waiting for a call from the teacher.
-Matt had Finals this week. He felt good about them and thinks he did well.
-I've done no scrapping this week. I don't really want to unpack since I'm off to a retreat again in a few days. So, I've been feeling a little lost without having anything to work on.
-John and I had a date night last night and went to see "Date Night." It was pretty funny.
-we had to change all of our auto and house insurance providers as our other one wanted waaaaay too much to put Matt on our car insurance. Teenagers cost way too much money.

Looking ahead at the coming week:
-Cameron leaves on Tuesday with the Grade Eight class for their four-day trip to Quebec. He's so excited! I'm going to miss him like crazy.
-I anticipate that the house should be able to stay clean this week with Cameron (aka Pig Pen) away.
-Matt is off for the next two weeks as he's between semesters now
-Spencer's Jazz Band has their big fund-raiser concert on Friday night but I'm going to have to miss it
-I'm leaving Thursday for the Scrapping Cabin retreat at Jackson's Point. I'm hoping to get a lot done this time around.

I finally got around to this layout that's been in my pile since last summer. These pictures were taken at Peggy's Cove. What a beautiful place! 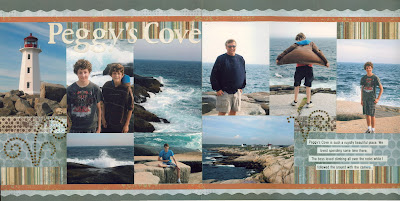