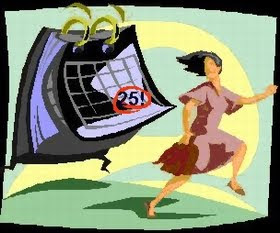 Yes, Christmas time is here. Yikes! How did it sneak up on me like that? As I was falling asleep last night I started to have a panic attack. I haven't started shopping yet, my trees are in place but there are no decorations, I mean, it's December 2nd already ... what's wrong with me?
OK, I know, I know. I still have lots of time. Maybe the panic attack had something to do with the fact that the radio station I listen to is now all Christmas music, and last night was our first official Christmas event with the Band.

Maybe I need to turn the radio off, and have a cup of tea. I like that idea.

So, the retreat this past weekend went well. We had a really good time. As usual, I took too much stuff, got far too few things accomplished, ate way too much, slept too little, and laughed until my sides hurt. Perfect weekend! It doesn't get much better than that.

It was our 22nd anniversary over the weekend. Can you beleive it? How is that possible? It has just gone so fast. I know it may be cliche, but I would marry John all over again. He is my other half and together we are whole. No matter what life throws at us, it just makes our relationship stronger.

It was also my birthday on Monday. 48! FORTY EIGHT!!!!! I spent the day with my friend, Deb. We went for lunch and then we went dress shopping for her wedding. She already has her gown so we were looking for a Maid of Honor dress. We found one, and I love it!
We were going to go out for dinner as a family, but by the time we were all home, I had a headache and I was still exhausted from the weekend so I ended up crashing on the couch and we ordered in. Much better! The best part of the day ... getting a kiss from all my boys!
Posted by Barbara at 9:23 AM