Another week has zipped by and is coming to a close. At the beginning of the week I always have such great ambitions about what I want to accomplish during that week, but then end up not even getting to half of what I needed and wanted to do. Maybe I shouldn't have such an extensive list, or maybe I need to take extra caffine, I don't know.
Anyway, here's a list of what I did manage to get done this week:
-I finished a recipe/menu box that I've been working on for a few weeks. (I will post more about that when I take pictures.)
-I managed to get everyone to where they needed to be on time
-endless housework
-shopping for Monday's big family dinner that will be here. Today there's still more to do
-I went on a jeans hunt for Cameron's pants. At the beginning of September he had a drawer full of pants. I have no idea what happened to them all. I had to throw 2 pairs out this week because the knees were gone. The rest are mia! I did manage to find two of them at the bottom of Spencer's closet (?!?!?!?!?) He also told me that he had at least one pair in his locker at school. Sheesh!
-I went through Spencer's clothes to see what he's needing for the fall/winter. It looks like we will be going shopping this afternoon for more jeans for him too. Why won't they stop growing?
-we managed to get up the new chandalier - very nice!! I love it.
-I got some more scrapping done.
-I spent far too much time on this computer!!
Well, there's always next week, sigh!
This is a recent layout I did. I took these pictures of Spencer last Spring when he was taking the Go Train into Toronto by himself to attend a Master's Class for piano. It really struck me at just how grown up and independent he is becoming. 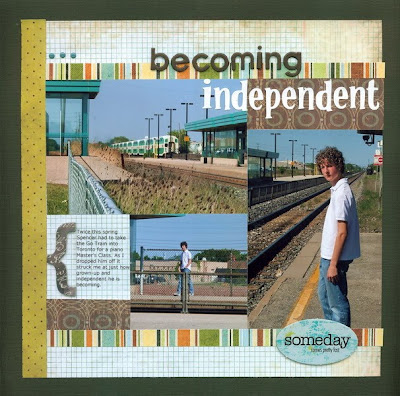