I've been trying to get my scrapping mojo back. Unfortunately it got put away over Christmas, and I've been having a hard time getting it back. This past weekend I went to a crop at Cathy's house. She had a few friends in. I stayed overnight and then the next day went to a birthday crop for my friend, Joy. I had a lot of fun, took waaaaay too much stuff in hopes of getting a lot done, and managed to get some done. I worked on a few different things, but didn't complete any of them. Argg! 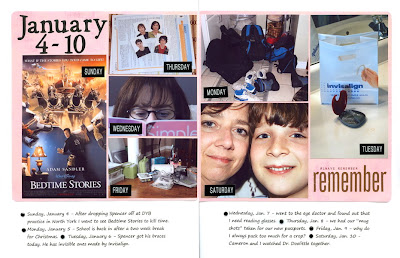 The layouts are going to be very simple as well as the journaling. I want to just focus on the pictures.


In other news, the semester is winding down for Matthew and Spencer. They start exams next week.

John is sick right now. He caught the head cold that I had last week.

Spencer got his braces last week. Due to his age (most of his peers are long done braces) and the fact that he still needs to be able to play his cornet and trumpet, we opted for the Invisalign braces ... they are the ones that are clear liners that just pop over his teeth and are almost invisable. They are like a skin over his teeth. He takes them out to eat, and brush, and can take them out to play (if they are affecting his sound). Every two weeks he changes to a new liner. Each liner is slightly different so that they slowly move his teeth. The benifit to the Invisalign (other than the fact that no one will know that he's wearing them) is that they are half the time. Hopefully in eight months time, if not sooner, he will be done. Wow!

I found out today that my friend, Milena, has a blog. I've added her to my blog list on the left side. I'm so happy that she's able to come and scrap with me (and the other girls, lol) on Tuesdays now that her girls are both in school and her schedule has changed. We met a few years ago, when Cameron and Merideth were 4. We would scrap while the kids would play. I'm so glad that we have reconnected.

I had an appointment with the eye doctor last week. The inevitable has happened ... I now need reading glasses. Fortunately enough I only need the weekest of perscriptions so I can make do with a pair from the drug store.
Posted by Barbara at 7:13 PM