It doesn't happen very often, but this weekend is a free one for us. We have nothing on our agenda, except for Church tomorrow morning. It is just so relaxing not to have to run from one thing to the next ... especially after such a busy Christmas season.
Last night Cameron had a friend over. They played wii and played on the computer. After supper, we went out to see Mall Cop. Both John and I weren't expecting much from this movie, but we were both pleasantly surprised. It was pretty funny. The boys loved it.
I really tried to sleep in this morning. I woke up around 7 a.m. and then spent the next two hours forcing myself to sleep. I finally got up at 9. John was already up and after having breakfast together, we decided to hit a few stores. It was very relaxing for us (even though we went to costco and it was crowded) Since we really had no list of things to get, or time constraints, it was nice. After that we found the new Panera Bread that has opened in Mississauga.
Have you tried Panera Bread?? The first time we tried it was in Panama City Beach last March. Since then I've been twice more ... once in Virgina Beach and once in Buffalo. So ... when we found out they had opened one in Canada ... and near us ... we were so happy. Yum! You gotta try it if you find one. You won't be disappointed!
I planned on coming home and scrapbooking, but instead I ended up playing on our new Wii Fit. I gotta tell you that I actually felt it in my legs when I was done. It was amazing how the board was able to tell if my positioning was right in doing the excersizes and told me so.
So, I never did make it into my scrapbook room today ... but I did get quite a bit done this week so that's OK. Here's one I did this week: 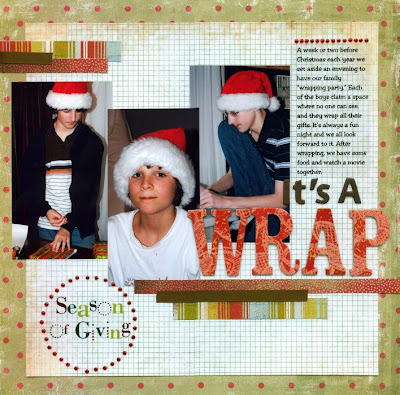