Woosh! Was that Christmas that flew by?

Wow! What a whirlwind!

We had a great Christmas here. On Christmas Eve John's parents, my parents. my brother Rick, and my sister and brother-in-law all arrived. We spent a wonderful evening together and then everyone stayed over. (I love having a houseful on Christmas Eve and Christmas morning.) The boys very happily gave up their rooms to our company as they love having everyone there.

On Christmas morning I had to get up at 6 a.m. to get the turkey in the oven (I use the cook-from-frozen, pre-stuffed kind.) After it was in the oven, I sat with a cup of tea, in front of the fireplace with the lights on. The house was so silent. Cameron and John were the first ones up ... and they weren't up until about 8 a.m. By the time everyone else was up and ready to open presents it was after 8:30.

The boys were thrilled with their gifts. I think Santa did a good job this year.

The rest of the day was spent breaking in all the new items that were opened that morning, reading instruction manuals, charging up batteries, and checking out each other's gifts.

On Boxing Day we usually head to my parents' house in London to have my family Christmas, but due to all the snow that had fallen and the road conditions, we ended up hosting it at our house. So, for the third day in a row, we had a houseful and we loved it. It was another great day spent with all my family. I really missed not having both Stephen and David and their families there, though.

Saturday I woke up with a huge back ache (too much activity I guess). We packed up and went to London to spend the weekend with my parents before they head off to Florida for three months. It was a perfect way to end our celebrations as it was a nice quiet couple of days.

Anyway, I guess I've been a very good girl this year because look what Santa brought me. 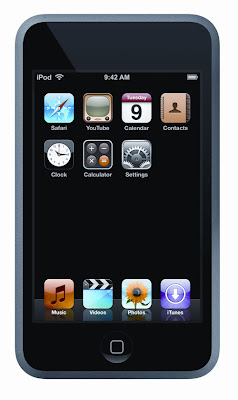 Yes, I got my ipod touch! ...and this thing is even cooler than I thought it was. I've been having so much fun playing around with it. The coolest thing is that it is WiFi so I can hook up to the internet with it and surf the web anywhere that I can pick up a wifi connection. Now I can check up on blogs and other sites while I'm trying to kill time while waiting around for the boys.
OK, time for bed now! I have a lot of sleep to catch up on!
Posted by Barbara at 9:46 PM