A Hot Time in the Old Town

Once upon a time there was a very lovely family who owned a trailer. It was a nice new trailer and they all loved it.

One day (let's call it Friday) they decided to go up to their brand new trailer to enjoy some much needed rest and relaxation after a long week of school. The weather was perfect and everyone was happy.
After a night of relaxing by the campfire, and chatting with the next-door neighbours, everyone turned in. Everyone was tucked into their beds while watching Jay Leno (a favorite thing to do while tucked in their beds in their brand-new trailer.) Everyone was happy.
While watching Leno, the mother kept hearing some quiet banging noises that appeared to come from the camp's fix-it shop that was just behind the trailer. It was interferring with their enjoyment of one of their favorite things to do while in their brand-new trailer. They were able to put it out of their minds, and once again enjoy Jay. Soon, everyone was fast asleep, happy, warm, and content.
Bang, bang, bang. It was 1:15 a.m. "What is that?" the mother asked? The father arose from the bed to investigate a little further. He emerged, sleepily, from the trailer. "Holy smokes!" he yelled. "It's on fire! The Fix-it shop is on fire!"
Both the mother and the father sprang into action and ran over to the shop, meeting a couple of men who had also just discovered the fire, and had called the fire department. As the mother and father helped move some trailers away from the side of the shop, the mother had a strong desire to run and get her camera to take pictures of the event so she could scrapbook them later.
"There's propane and gas tanks in the shed." someone stated. "We need to evacuate the trailer park." The words snapped the mother out of her layout-planning thoughts, and the mother and father once again sprang into action.
Running back to the trailer, they woke up their neighbours alerting them to the danger. The father continued his heroic measures of saving the others in the trailer park while the mother ran to rescue her boys from their impending doom. She woke them and told them to grab their shoes and get out. The youngest (we'll call him Cameron) immediately jumped from his bed and grabbed a shirt and shoes and ran from the trailer (while still in his boxers.) The too older ones, who are teens (we'll call them Matt and Spencer), rolled over and went back to sleep. Once again, the mother woke them and told them of the danger they were in. Once again, they went back to sleep. The danger of death didn't spring them into action, but the threat of loosing their game boys if they didn't get out, did.
Soon the family, and all their neighbours, were safe in the field, far away from the fire, and far away from danger. All thanks to the heroic mother and father. 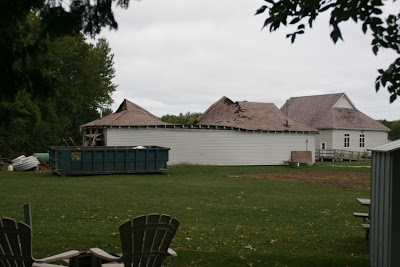 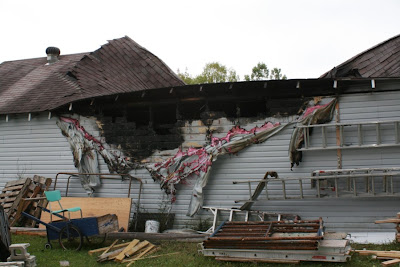