Saturday we didn't have a lot planned as John's parents were going to come for the day. Well, unfortunately Garnet took sick and so they weren't able to come.
After sitting around most of the morning and into the afternoon we decided to take a long bike ride that we've been planning to do forever. Spencer and his friends went out to a movie, so Matt, Cameron, John and I headed out with lots of water. We rode through a trail system in Oakville that took us down into 16 mile creek. It was an awesome ride! The best part, of course, was riding down-hill. Not so much fun when you have to come back up ... but it was well worth it. The scenery was beautiful and the trails were very peaceful. 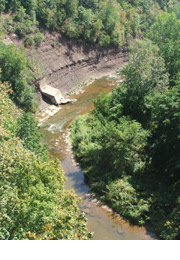 This was one of the reasons we wanted to live in Oakville was because of the many trail systems and the closeness to the waterfront. We haven't taken advantage of too many of the trails, but this certainly gave us a taste, and I can't wait to get out there and do the others.
The only downside is that I rediscovered many muscles in my legs that I had long forgot were there. I've been doing really well in the exercise department (on the treadmill at least three times a week) but obviously there are muscles that I'm not even touching! I've been walking a little funny!
Posted by Barbara at 10:18 AM