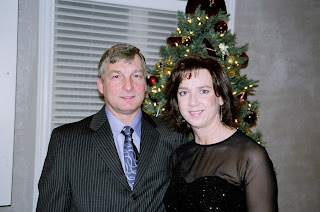 Saturday night was John's work party. As usual I wasn't looking forward to it. I have to go out and buy a new dress (one which will only be worn once or twice) and all the accessories to match. Then I spend a couple of hours getting myself all dolled up. This is the one and only night of the year in which I can really dress up like a girl. After fighting the traffic into the city I have to spend the evening making small talk with a group of people that I don't really know. The dinner part isn't too bad, but once the dancing starts and the music is turned up, it's hard to talk to anyone.

This year it was very different. A couple of weeks ago, the company found out that the new company that recently purchased them is planning on moving the entire operation to Dallas. Most of the people will be out of work. John was asked if he would consider going to Dallas but we can't make that kind of move at this point in our lives. Matt only has one year after this one in high school and his school is wonderful at meeting any and all his needs. I know that there's no way we would find a school for him that would equal what he has. Spencer is also loving high school at the same school and is thriving musically, socially, and academically. We're not worried, however, because John will be able to find employment easily in his field. What we are hoping for is that he will get a package right before the summer and he will take two or three months off over the summer.

The mood at the party was pretty low-keyed, as you can imagine.
Posted by Barbara at 8:23 AM