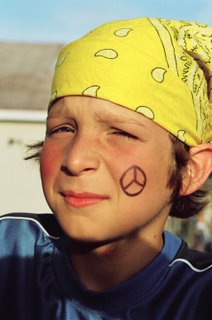 Junior Music Camp is over for antoher year. What started out as a tough week due to issues in our cabin, ended as another fun-filled week. The kids all had a good time. As usual, the water was flying all week. I don't know how many times I ended up wet. Cameron had a great time. He did very well with his music and met some wonderful friends in his cabin. The last day of camp he ended up not feeling well (I'm sure all due to lack of sleep) so I let him have a nap in my cabin for a while. Spencer and Matthew were there as Junior Faculity which meant they were helping out with the programmes. They had a lot of fun. Spencer said he much prefers junior faculty over being a camper. I think the highlight for him was being able to play in the faculty band with all the adults.

The highlight for me would be the last night. After the cabin was in bed, we spotted two of the men sneaking behind the cabins with water buckets. A huge water fight started and ended up going on for almost three hours until about 2 a.m. It was such a blast!

OK. now I have to switch gears! We are off to Calgary today. We will be spending the next three weeks out west visiting my brother and his family and my sister and her husband. I can't wait to see them all. ...but before that I have a ton of stuff to get done, including finishing my packing.
Posted by Barbara at 7:37 AM