So here's the story of the water colour 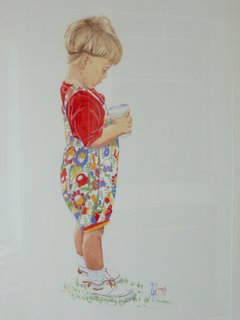 We had just moved to Barbados a few months earlier. There were a lot of Canadians living there and so we had a large group that we hung out with. One day we went to a multi-national fair for the day. The group we were with all had children around the same age. Spencer was two at the time and all the toddlers were running around and playing together.

We noticed a woman with a camera who was taking pictures of all the kids. We were a little alarmed at the thought of what she was doing, when she came over and explained that she was an artist who loves to paint children. She takes her camera and snaps tons of pictures and when she sees one that she likes, she will paint it.

We thought nothing more if it, but always wondered if she ended up painting any of the kids.

Fast forward a year. A friend of mine phoned me and said that she was at a school event when the artist approached her and asked her if she had a daughter with curly hair that had been at the multi-national fair. She told her that she did. The artist then told her that she had painted a picture of her daughter and Spencer playing with the stoller, but unfortunately had sold it already. She then said that she had been looking for the mother of the other child as she had painted a large picture of just him. She had been looking for us for months and even had published the picture in the paper in hopes that we would see it.

We weren't even sure that is was Spencer (as there was more than one little boy with the same blonde haircut that day) but we rushed down to her studio and there it was, on her wall. A fantastic water colour of my baby boy.