Tonight Spencer had his piano competition. He said he was actually nervous. He usually isn't nervous about these things, but I guess as he gets older he's getting more so. He played well. He made a mistake right at the end. Dad didn't notice. The adjudicator commented on it saying that it was ever so slight that likely no one would have known if he didn't say anything. Well .... Mom noticied. (of course I've heard him play the same piece over and over again!) In spite of the mistake, he came home with third place. Way to go, Spencer!

I actually scrapbooked today. I got two layouts done. I worked on a layout for a challenge on the Cherished Scrapbooks board. It was an ad challenge. It was so much fun to do. I think I'm going to do more. 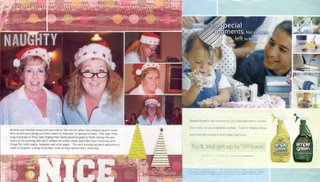