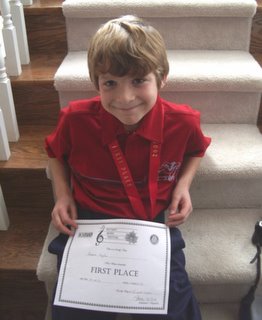 Yesterday Cameron played for the first time in the Rotary Music Festival. He competed in the beginner class. To be completely honest, I really wasn't expecting much as he doesn't seem to enjoy it that much and it's always a struggle to get him to practise. On the way there we talked about how he would handle it if he didn't win a ribbon (which in my mind was very likely.) He said he would be alright and would congratulate the winner. OK! So I did my job.

Well ... he won. He won first place. My baby came first. I was so proud of him. The funny thing was that he didn't really get that he had won. The second and third place winners got a lovely ribbon as well, and he was thinking that they won. I wish I had my camera when I told him to read the ribbon after we left the room. He just beamed when he saw that it was first place.

Another proud mommy moment for me today was that Spencer played the last post on his trumpet for the school assembly today for Rememberance Day. He played it beautifully if I do say so myself.
Posted by Barbara at 1:20 PM